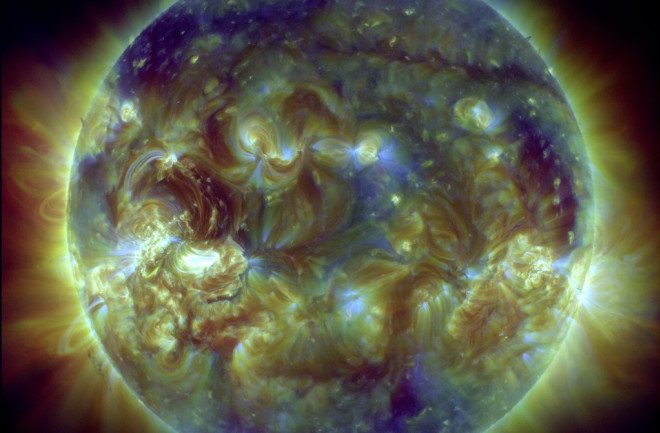 This image, captured by NASA's Solar Dynamics Observatory spacecraft, shows the sun in false color on Jan. 4, 2014 — at perihelion. It is actually a composite of three images of different colors, each of which highlights a different part of the sun's corona, or atmosphere. (Source: NASA/SDO) As a mind boggling deep-freeze is poised to descend on a large portion of the United States, it will probably be cold comfort to know that on this very day, Jan. 4, 2014, Earth reached perihelion, its closest point in its orbit around the sun. Earth's orbit is elliptical, not perfectly circular. And that means sometimes we're closer, and other times farther, from the sun. When we reached perihelion today at 12:00 UTC, or 7 a.m. EST., we were a mere 91.4 million miles (147 million km) away — 1.67% closer than our average distance from the sun. If you live anywhere from the Upper Midwest to the mid-Atlantic region and have been paying attention to the weather, you are probably thinking, "WHAT THE... HECK?!" I'll get to an answer to that question in a minute. But first... The coming cold snap will evidently be so brutal that the National Weather Service exercised some atypical exclamatory effusiveness in its forecast:

The coldest weather in years will be making its presence known from the Upper Midwest to the Mid-Atlantic region for the beginning of the work week. The polar vortex, a mid-upper level cyclonic feature normally present over northern Canada, will be displaced unusually far to the south over the northern Great Lakes and southern Ontario. Owing to the deep layer of the cold air mass, this will provide for an incredibly strong surge of bitterly cold Arctic Air along with gusty winds . . . Particularly noteworthy will be the extreme wind chills and nearly unheard-of daytime highs that are forecast. Wind chill warnings are in effect for many areas with wind chills on the order of -30 to -50 degrees expected! Afternoon highs on Monday for parts of the Midwest states and the Ohio Valley will fail to reach zero degrees!

Here's what those temperatures should look like, according to the current forecast, by Monday at 7 a.m. EST:

So, back to... WHAT THE HECK? When we're closer to the Sun, Earth does, in fact, receive more sunlight than when it's farther away — about 6.5% more, according to NASA

. But that fact very obviously does not cancel winter here in the Northern Hemisphere. Why not? The seasons are actually controlled by the 23.5 degree tilt of Earth's rotation axis. And right now, the Northern Hemisphere happens to be tilted away from the sun. So despite perihelion, it's winter up here. Of course down in the Southern Hemisphere, which is tilted toward the sun, it's summer. On July 4, the Earth will reach its farthest point in its elliptical orbit. But it will still be summer, of course, because the north will be tilted toward the sun. Earth's orbital path is not static — it actually changes very slowly, over the course of thousands of years. Here's a great explanation of what happens from NASA's Earth Observatory

The shape of the Earth’s orbit changes from being elliptical (high eccentricity) to being nearly circular (low eccentricity) in a cycle that takes between 90,000 and 100,000 years. When the orbit is highly elliptical, the amount of insolation received at perihelion would be on the order of 20 to 30 percent greater than at aphelion, resulting in a substantially different climate from what we experience today.

Earth's axis of rotation also changes. In a phenomenon called "precession," it moves very slowly around and around like that of a wobbly, spinning top. The degree of tilt, or "obliquity," also shifts slowly — in a cycle that averages about 40,000 years. More tilt results in warmer summers and colder winters. And visa versa. These changes are important because they appear to play a critical role in the coming and going of ice ages. The theory was originally worked out by a Serbian astrophysicist named Milutin Milankovitch

. In any case, NOT TO WORRY! Although it might feel like the coming cold snap will herald the dawn of a new Ice Age, it will just be another unpleasant bout of winter weather. The key factor in the coming of an ice age seems to be temperature in the high latitudes during summer — something that's strongly influenced by those changes in Earth's orbit around the sun. When temperatures are cooler in summer, more snow from the winter persists. And over the course of years this phenomenon can play a big role in the formation and growth of giant ice sheets.