Haiyan Slams Into the Philippines, Possibly One of the Strongest Landfalling Typhoons on Record 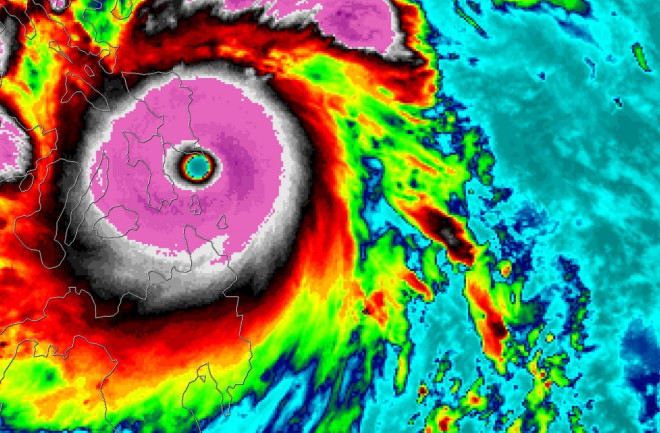 Super Typhoon Haiyan makes landfall in The Philippines at 4 a.m. local time, Nov. 7, 2013, as seen in this screen shot of an animation of false color images from the Korean COMS-1 satellite. Click on the image to watch the animation. (Source: CIMSS Satellite Blog) | Update 12 p.m. MST, 11/9/2013:

Just how strong was Haiyan at landfall? Was it the strongest on record, as meteorologist Jeff Masters of Weather Underground continues to argue? Two days after landfall, it's still not entirely clear. Rene Paciente, a forecaster with the Philippine government’s national weather agency, is quoted in the New York Times as saying, “Some of the reports of wind speeds were exaggerated. His agency pegged the storm's winds at landfall at about 150 m.p.h. Meanwhile, satellite measurements indicated speeds of as high as 195 mph, with gusts to 235 mph. Given this conflict, it seems that only when scientists have an opportunity to get in on the ground will we get closer to the truth.

With this in mind, I think I jumped the gun in reporting the strength of Haiyan. So I've altered the headline, changing it from "likely the strongest landfalling typhoon in recorded history" to "possibly one of the strongest..." The facts, as they are known right now, justify no more than that.|

Since Haiyan's strength at landfall has not yet been officially confirmed, I decided to qualify the headline, saying that the storm is likely to go down as the strongest landfalling typhoon in recorded history.Originally, the headline simply said that it was.

| Super Typhoon Haiyan came ashore today on the Philippine island of Samar with winds that may have been has high 195 miles per hour. This would make it the strongest tropical cyclone ever to make landfall in world history, according to meteorologist Jeff Masters of Weather Underground. I think it's safe to assume that the news coming out The Philippines will be pretty grim. The image above is a screenshot from an animation of satellite images put together by the Cooperative Institute for Meteorological Satellite Studies showing the storm just as it makes landfall. Click on it to watch the animation. Here's what the monster storm looked like in the visual part of the spectrum as it was approaching The Philippines:

Super Typhoon Haiyan, as see by the Korean COMS-1 satellite as the storm was approaching The Philippines. (Source: CIMSS Satellite Blog) Click on the image to watch an animation. Look closely for small vortices whirling within the cyclone's eye. These are called "mesovortices," and they can contribute to even greater damage when a storm charges ashore. Haiyan has been fueld by ideal conditions, including low wind shear and warm ocean temperatures, according to the National Oceanic and Atmospheric Administration. Here is a NOAA map showing the amount of heat energy that has been available to fuel the storm's intensification:

Super Typhoon Haiyan's predicted track across warm ocean waters is depicted in this map also showing the total amount of heat energy available to fuel the storm's intensification. (Source: NOAA) According to NOAA, the map:

...shows the total amount of heat energy available for the storm to absorb, not just on the surface, but integrated through the water column. Deeper, warmer pools of water are colored purple, though any region colored from pink to purple has sufficient energy to fuel storm intensification. The dotted line represents the best-track and forecast data as of 16:00 UTC on November 7, 2013.

This is a developing story, so I'l probably be back with more imagery and information as I gather it.