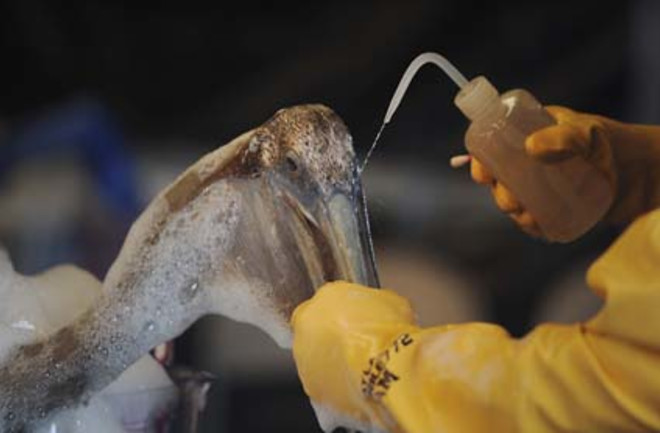 With no end to BP's gushing oil leak in sight, attention has turned to trying to ascertain just how damaging the spill could be for wildlife in the Gulf of Mexico. Yesterday the National Oceanic and Atmospheric Administration (NOAA) doubled the size of the fishing ban in the Gulf. Now nearly 20 percent of the water is off-limits because of the expanding oil slick. Because so much oil is under the surface, and diluted but still dangerous, it's hard to get a handle on just how bad things will be. But turtles seem to be the bellwether for worries about sea life. Since April 30, marine biologists have recorded more than 150 sea turtle deaths, and while they can't immediately say all those were directly related to the oil spill, it's a much higher number of deaths that is usual for this time of the year.

Necropsies, the animal equivalent of an autopsy, have been performed on 40 turtles so far. And tissue samples taken from as many specimens as possible are being analyzed for abnormally high chemical levels associated with oil contamination. Initial necropsy results are expected in a few days, but laboratory tests of the tissue samples will likely take weeks to complete. In many cases these results are needed to make a conclusive finding about the cause of an animal's death [Reuters].

. And as spring turns to summer, they could be more in the path of danger.

The nesting season for the sea turtles runs until mid-July, and for most of that time the mothers will remain off Padre Island and the beaches of Mexico, where there is currently no oil. But then things become more chancy, as new sea turtle babies go off to sea, floating on currents in the gulf or on seaweed patches that could be covered by crude [The New York Times].

Meanwhile, back at the leak site, BP says that the siphon it successfully installed

last week is now carrying 2,000 barrels of oil per day

to a tanker on the surface. While the company trumpeted this as capturing 40 percent of the estimated 5,000 barrels of oil per day leaking in the Gulf, we noted last week

that the 5,000 figure could be a gross underestimation. If the leak is truly 50,000 barrels and not 5,000, then the 2,000 currently being captured is barely a drop in the bucket. In Washington, Democrats in the Senate are pushing a plan to raise the cap on liability

for a spill from its present $75 million to at least $10 billion—a more than 130-fold increase. Republicans have blocked the measure thus far. And in Florida, people are left to wait and see if Gulf currents bring oil their way.

Florida Democrat Senator Bill Nelson released a forecast by University of South Florida College of Marine Science experts who said part of the oil slick may reach the Keys in five to six days, and possibly Miami five days after that. "While I always hope for the best, this is looking like really out-of-control bad," Nelson said in a statement before another round of congressional hearings on Tuesday [Reuters].