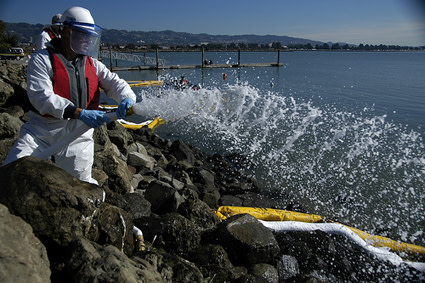 The storm of news about the BP oil spill in the Gulf of Mexico has reached a relative lull today, as the oil company preps for its containment dome project that it will try to execute over the next several days. With a moment to take a break from the constant news updates, reports are starting to ask: What's with all that chemical dispersant responders have been dumping on this spill?

The stuff is called Corexit, made by the Nalco Company, and BP has now dumped about 160,000 gallons of it in the Gulf (as well as pumping 6,000 gallons more all the way down to the leak location). The dispersant particles bind to oil, sink, and are carried away by ocean currents. But while that could help keep a spill from reaching the shores en masse, it means the oil isn't actually "cleaned up," but rather diluted. And the dispersant chemicals themselves can be dangerous, as Nalco's own documents (pdf) show.

The 10-page documents go into detail about compounds that must be handled with great care in their original form, that should not touch the skin and can damage lungs. Although the documents state that the potential environmental hazard is “moderate,” they say that when used as directed at sea in the recommended amounts the potential environmental exposure is “low” [The New York Times].

The company says Corexit contains no toxic metals or carcinogens. But it has refused to divulge the full chemical composition, calling it proprietary information. That's annoyed environment groups that want to know exact what we're putting into the sea in such mass quantity. Still, with the number of options dwindling and oil continuing to gush into the Gulf, some of those groups have come to accept chemical dispersants as the lesser of two evils.

"It's basically a giant experiment," said Richard Charter, a senior policy adviser with Defenders of Wildlife. "I'm not saying we shouldn't do it; we have no good options" [AP].

Another eyebrow-raiser is the choice of chemical. While the United States is familiar with Corexit from having used it previously, Wired.com reports that there are better alternatives on the market, like Dispersit.

Both Corexit and Dispersit were tested by the EPA, and according to those results, Corexit was 54.7 percent effective at breaking down crude oil from the Gulf, and Dispersit was 100 percent effective. Not only did Corexit do a worse job of dispersing oil, but it was three times as lethal to silverfish – used as a benchmark organism in toxicity testing — and more than twice as lethal to shrimp, another benchmark organism and an important part of Gulf fisheries [Wired.com].