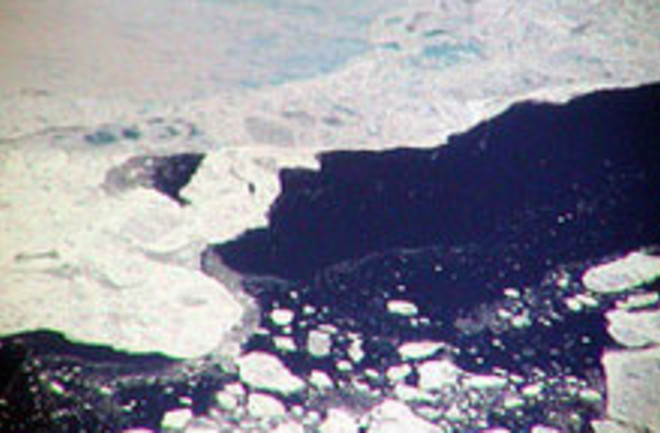 A rare piece of good news about the effects of global warming trickled through the media this weekend, as Dutch researchers announced that Greenland's massive ice sheet isn't melting as quickly as some had feared. Researchers used 17 years of satellite data to measure the seasonal changes to the ice sheet, which covers about 80 percent of Greenland's surface, and found that the episodes of extremely rapid melting that researchers have observed recently are a transient summer phenomenon. The melting of the Greenland ice sheet figures into the most troubling global warming doomsday scenarios; if the vast stretch of ice melted completely, it would raise global ocean levels by about 23 feet, swamping island nations and coastal communities. The new study dismisses the idea that such a doomsday could come to pass within a few decades. However, other researchers were quick to say that this study doesn't answer all the questions about how the ice sheet will behave under shifting climatic conditions.

The debate over the ice sheet began with observations of enormous lakes of meltwater that form on its surface each summer. The water seeps through cracks in the kilometer-thick ice to bedrock, where it acts as a lubricant. The sheet can move up to twice as fast in the summer, when meltwater is flowing, as when it is not. Many fear a positive feedback loop, whereby the accelerating flow will bring more ice down out of the mountains and toward warmer temperatures near sea level [New Scientist].

The new study, published in the journal Science [subscription required], shows that this meltwater does speed up ice movement for a few days, but that the system returns to normal within a week after the meltwater drains away and its lubricating effect is lost.

The authors and independent experts familiar with the research stressed that the findings did not preclude the possibility that more widespread surface melting could eventually destabilize big areas of Greenland, the world’s second largest ice storehouse.... But [glaciologist Richard] Alley and other experts said the new study showed that it was unlikely that Greenland’s ice had already become destabilized in ways that could cause a surge in sea levels [The New York Times].