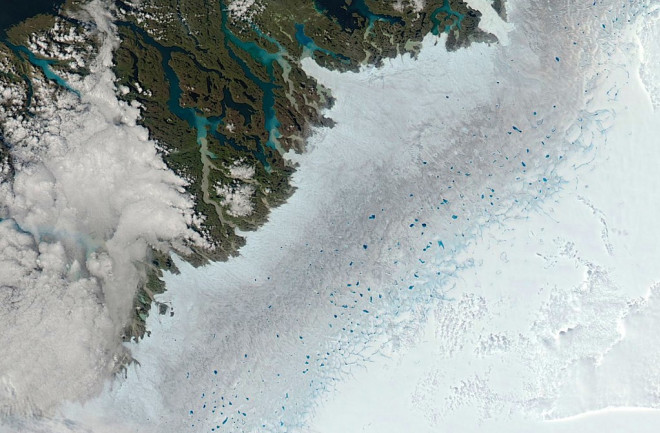 In this image acquired by NASA's Terra satellite, melt ponds are visible on August 2, 2013 atop the ice sheet along Greenland's western coast. (Image: NASA. Post-processing: Tom Yulsman) The melting season in Greenland peaked in late July, according to the latest report from the National Snow and Ice Data Center. When it is all over, NSIDC scientists project that the season will be much closer to the long-term average than last year — when more of the island's ice sheet melted than during any other year in the satellite record. The image above, acquired by NASA's Terra satellite, shows the surface of the ice sheet in western Greenland pockmarked by blue melt ponds, as well as what appear to be a lacy network of meltwater channels. The ponds are not unusual, as this part of the coast typically does experience melting in the summer. A good deal of the ice here also seems to show a grayish discoloration. Melting reduces the albedo, or reflectivity, of snow and ice, so the darker tone may be the result of that. But I'm wondering whether dust blowing in from far afield was a contributor. By darkening snow and ice, it can contribute to melting. I'm tracking this down and will post an update when I get an answer. In the meantime, some details from the NSIDC update:

The period between July 21 and August 19 [click here for a graphic] included the greatest percentage of surface melt extent days for Greenland during 2013, peaking at 44% on July 26 [click here]. However, the overall melt extent for 2012 was far greater, exceeding 40% for several weeks [click on thumbnail at right].

Although melting was much less extensive this year than last, the town of Maniitsoq did experience what may have been the highest air temperature recorded in Greenland since 1958: 78.6 degrees F on July 30. According to the NSIDC report, strong winds from the south brought unusually warm temperatures to the region. That was compounded by air rushing down from higher elevations. This compresses and thereby warms the air. The image at the top of this post shows an area not far from Maniitsoq just a day or so after that high temperature was recorded. Despite that unusual event, "the majority of the ice sheet showed mild to moderately lower-than-average melt duration for this season," according to the NSIDC report.