Green Makeover Aims to Cut Sears Tower Electricity Use by 80% 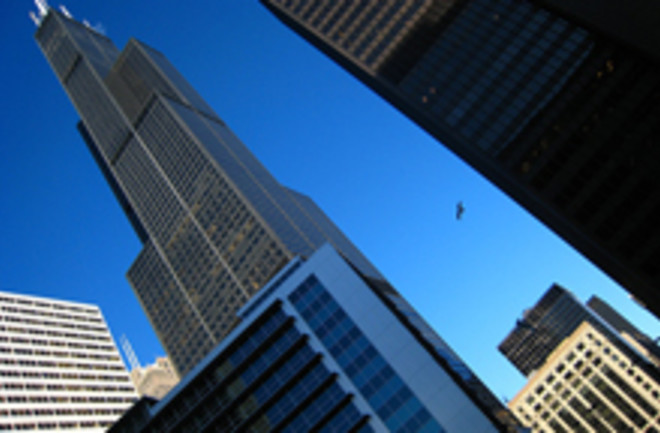 When Chicago's Sears Tower was completed in 1973 the 110-story building was the tallest in the world, and it offered a bold example of the human potential to build towards the clouds. Now, although the tower lost the title of tallest building to other skyscrapers in the 1990s, the tower hopes to dazzle the world anew with a fresh vision of urban architecture: The building will soon receive a $350 million environmental retrofit, with wind turbines, solar panels, and gardens all added to the building's staggered rooftops.

The 5-year project would reduce the tower's electricity use by 80 percent and save 24 million gallons of water a year, building owners and architects said.... "Our plans are very ambitious," said John Huston of American Landmark Properties, who represents the building ownership. "Our plans to modernize and transform this icon will re-establish Sears Tower as a leader, a pioneer" [AP].

The building will soon boast solar panels on the 90th floor roof to heat water used in the building, and different types of wind turbines will sprout on various rooftops so the building's engineers can determine which design best captures the breezes that blow through the Windy City. Engineers will also replace the

tower's 16,000 tinted single-pane windows and create a "thermal break" between Chicago's frigid winters and hot summers and the interior [Reuters].

Other plans include revamping the tower's elevators to reduce the amount of electricity used, and installing new bathroom fittings to conserve water.

In such a huge tower, with 4.5 million square feet of office and retail space, 16,000 windows and 104 elevators, the project is bound to be one of the most substantial green renovations ever tried on one site, planners said [The New York Times].

To add a public-outreach element to the endeavor, the tower will have an educational center on the first floor explaining the details of the retrofit. Related Content: 80beats: Wind Turbines Could Theoretically Power the Entire World, and Then Some 80beats: Obama Talks up Clean Energy, While Republican Response Nettles Scientists 80beats: Windmills on NYC Skyscrapers Sound Cool, but Wouldn’t Work 80beats: A Solar Power Plant in the Sahara Could Power All of Europe