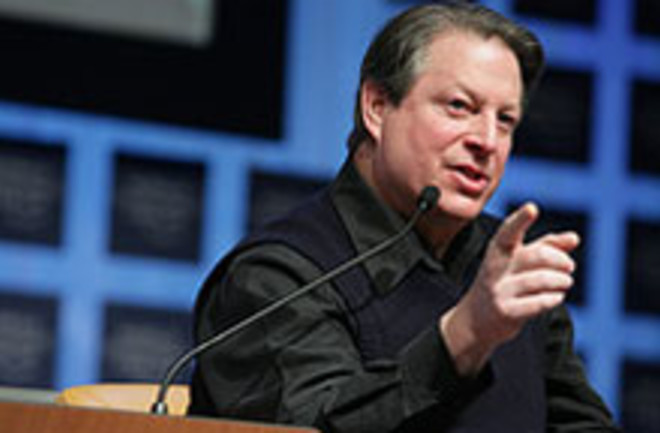 As Americans continue to pay over $4 per gallon of gas, pressure to act keeps growing in Washington. Both legislators and the Bush Administration are scrambling for solutions, offering conflicting proposals regarding oil drilling in Alaska and in U.S. coastal waters.

While America’s politicians struggle to come up with an answer to the country’s energy woes, its most lauded ex-politician says he has all the answers.... Al Gore, the Nobel-winning rock star of climate change, will outline his plans for an American “energy revolution” [The Wall Street Journal blog] in a speech today.

Just as John F. Kennedy set his sights on the moon, Al Gore is challenging the nation to produce every kilowatt of electricity through wind, sun and other Earth-friendly energy sources within 10 years, an audacious goal he hopes the next president will embrace [AP].

the current environmental policy proposals in Washington seem to be tending in the opposite direction.

But even as Gore is expected to ask legislators to turn away from fossil fuels and embrace alternative energy sources,

The Interior Department on Wednesday made 2.6 million acres of potentially oil-rich territory in northern Alaska available for energy exploration.... The decision will open up for drilling much of the northeast section of the Northeast National Petroleum Reserve-Alaska, holding an estimated 3.7 billion barrels of oil [The New York Times],

with production expected to begin in 2010. Congressional Democrats are not opposed to this move, which leaves the Arctic National Wildlife Refuge untouched for now. Offshore drilling proposals are more contentious. Republicans are

pushing to open up off-limits areas to drilling, especially in coastal areas along California and in the Gulf of Mexico [Dow Jones], while the Democratic leadership is trying to maintain a moratorium on such drilling. However, party unity is beginning to crack

of Democrats have begun meeting informally with Republicans to try to reach a bipartisan response to higher oil prices, and opening up new areas to drilling is part of the mix [The New York Times]. These Democrats, usually from more conservative states, have discussed a compromise in which revenue from leasing new drilling sites would fund tax breaks for renewable energy.