Google's Timelapse Tool Shows How Busy Humanity Has Been 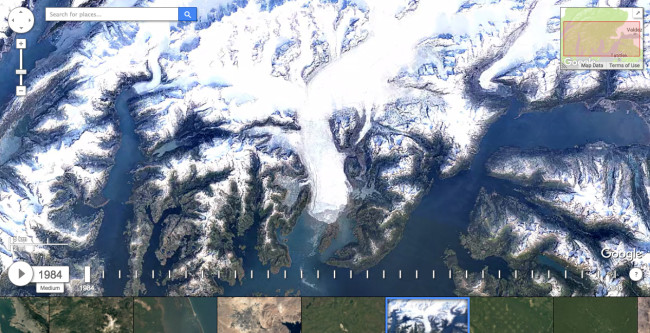 One of the most difficult problems for writers and historians alike is that it's hard to encapsulate the sheer magnitude of man's impact on the planet. Spill as much ink as you want about continents shifting, glaciers melting and humans taking over the planet, but some things are too massive to adequately put into perspective. An update to Google's Timelapse tool, first introduced in 2013, does a pretty good job of conveying the speed at which some parts of our planet are changing. Using satellite imagery dating back to 1984, mostly collected from NASA's Landsat program, Google constructed a year-by-year series of snapshots of the entire planet —some 5 million individual images stitched together. The interactive visualization allows users to select any place on Earth and watch how it changed over the course of three decades.

This iteration adds petabytes of data to to make the tool current, and sharpen the views of Earth with additional sources of data. You can search any location you want, or choose from a few pre-selected options from Google, which showcases the places that experienced the most dramatic transformations. Locations of rapid development in China and the Middle East and the receding Columbia Glacier in Alaska are among the more dramatic time-lapse views of Earth. In deserts, cities and crops spring from the dry sands, while lakes disappear; entire islands grow from the ocean in Saudi Arabia and cities overspill their boundaries in Southeast Asia.

You'd be hard-pressed to find a single area that hasn't changed in some way over the past 30 years. Google's Timelapse is a vivid reminder that change is constant, and the world as we know it today might seem foreign another 30 years from now.