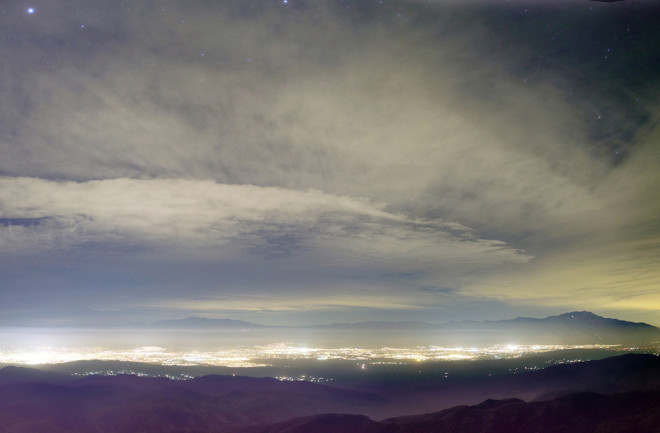 Light pollution over Joshua Tree National Park. (Credit: Dan Duriscoe) The beauty of the night sky is rapidly fading, and an update to the first global light pollution map, created 15 years ago, makes that painfully clear. The new atlas revealed that more than 80 percent of the world lives under light-polluted skies – that rises to 99 percent of the population in the United States and Europe. One-third of humanity can no longer see the Milky Way. As the new map shows, the night sky is slowly retreating to the glow of artificial light.

Over a decade ago, Fabio Felchi, a researcher at the Light Pollution Science and Technology Institute in Thiene, Italy, released the first atlas of night sky brightness. Felchi and company updated the original work and incorporated new, more powerful tools to make the final product even more precise.

(Credit: The authors of the manuscript. Prepared by Fabio Falchi) Felchi and his team combined high-resolution satellite data — via the NOAA/NASA Suomi National Polar-orbiting Partnership satellite — and on-the-ground sky brightness measurements to quantify global glow. They published a paper about the new atlas Friday in the journal Science Advances. The map shows how far the night skies in different parts of the world deviate from natural sky brightness. Gray indicates locations where light pollution is beginning to encroach, and it may be prudent to consider protecting these sites to maintain dark skies. At the other end of the spectrum, red zones are so bright, people living in these areas never experience conditions resembling true night. If you’re looking for the largest swaths of dark sky, Canada and Australia are your best bets. Still, the American West and parts of Scotland, Sweden and Norway retain some pristine skies.

(Credit: The authors of the manuscript. Prepared by Fabio Falchi)

There’s a lot at stake if we continue shunning our planet’s dark side. Excess light hinders ground-based astronomical observations, and it disrupts migrations of birds, turtles and other species. Even the American Medical Association now recommends curbing light pollution after scientists linked higher cancer rates and other diseases to the disruption of our circadian clocks — the natural sleep-wake cycle. But losing the night sky is also an ethereal problem — fewer people are beholding the beauty of the cosmos, pondering our place in the infinite scheme of things. Today, more researchers are paying closer attention to the environmental effects of light pollution, and Felchi’s team hopes the new map will be a valuable tool in future investigations.