Goliath Squid by the Side of the Road 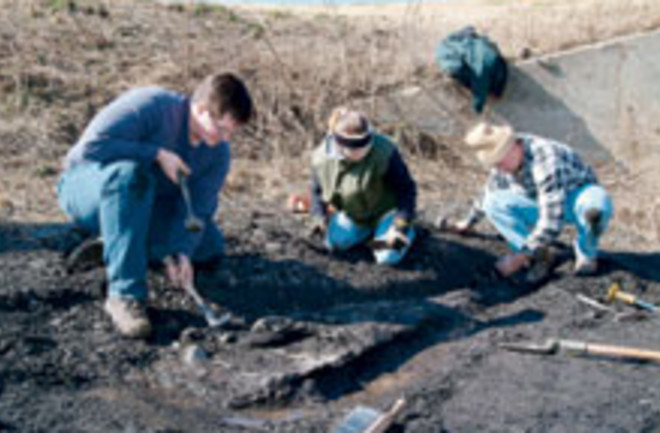 Students Jonathan Gillip, Sarah Kee, and Kevin Morgan found this fossil just in time. It probably would have been destroyed by the next hard rain. | Russell Cothren

Three University of Arkansas undergraduates have uncovered the largest nautiloid fossil ever found. The 8-foot-long shell was once the armor of Rayonnoceras solidiforme, a ferocious squidlike predator that occupied the top of the food chain 325 million years ago. The fossil finders, on the other hand, live at the bottom of the Arkansas paleontological food chain. They are geology students who found the nautiloid while prospecting in a drainage ditch along a highway bypass.

Intact Rayonnoceras shells are rare; ones this big are scarcer still. "It's the discovery of a lifetime, a world-class find," says paleontologist Walter Manger, the students' adviser. He suggests that the creature's great size may indicate it was infected with parasitic trematodes, which could have rendered it sterile. If nautiloids were like modern squids, Manger says, they bred as soon as possible and then died. A sterile animal could live on for decades, growing enormous. Another piece of evidence: The fossil is missing the pointy end of its shell, possibly because it was weakened by holes bored by trematodes.