Godzilla, The Blob, and Son of Blob: an El Niño reality check 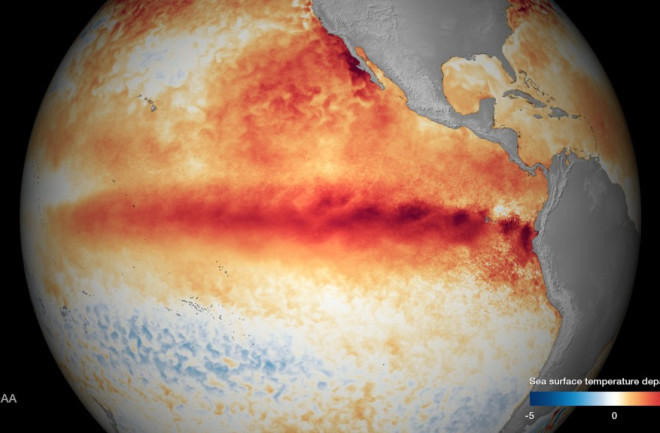 A spear of exceedingly warm sea surface temperatures projected across a large portion of the equatorial Pacific Ocean in early October — a signature of the strong El Niño event now underway. (Source: NOAA) Back in August, a respected NASA scientist told the LA. Times that conditions in the Pacific Ocean were pointing toward the potential for a "Godzilla El Niño." Meanwhile, a science blogger for the NOAA nicknamed it "Bruce Lee." Time has proved them right. The latest data released by the U.S. Climate Prediction Center, show that if El Niño continues to develop as forecast, it will go down as one of the most muscular on record. But really, who cares about data on exceedingly warm sea surface temperatures projecting like a spear across a large portion of the equatorial Pacific? (Okay, I do. See above.) Or the weakening of the trade winds along the equator? Or any of the other factors that go into El Niño forecasts? What most folks probably want to know is what's going to happen where they live. And here's precisely where things get trickier than some of the things you may have been hearing. Some of the stuff I've heard is just dang silly — and worse. For example, back in August a Denver TV meteorologist had this to say about how Colorado ski areas will be affected by El Niño:

This arrestingly specific prediction is certainly possible. It may be even probable. Even so, I think it's a little nutty. If you're wondering why, keep reading. What follows is my attempt at an El Niño reality check. Let's start with a question posed last week to Greg Carbin, Warning Coordination Meteorologist at the U.S. Storm Prediction Center, at the Society of Environmental Journalists meeting in Norman, Oklahoma. My friend and colleague Bob Henson of Weather Underground was the questioner:

This El Niño is one of the strongest on record. You would expect from precedent that we would get predictable impacts around country. And the stronger the El Niño, the stronger the connection. How queasy are you about what’s been said about this?

Carbin's answer: "I'm very queasy." Carbin may not be an El Niño expert per se, but he sure knows a thing or two about the fickleness of weather. He plays an important role in the National Weather Service system that issues watches for severe weather events. And I'm guessing he has been burned more than once by a forecast that turned out to be wrong. With that in mind, consider Carbin's own reality check: Just because strong El Niños have tended in the past to encourage certain weather patterns across the United States — including above average precipitation across all of California — that does not mean this Godzilla El Niño will do the same thing. "These are nonlinear systems," he says. "So just because El Niño looks like it did one or two times before, that does not mean you can say x = y . . . Slight changes in small-scale conditions can have big effects." A key aspect of Carbin's cautionary statement is his reference to "one or two times before." He's saying that very few strong El Niños have been observed with modern methods. (But for the record, more than one or two.) So the statistics available for basing forecasts are not as, shall we say?, robust as they could be. And while those relatively thin statistics show that a strong El Niño tilts the odds in favor of greater than normal precipitation across California and the southern tier of the United States, they also show that things don't always play out as expected.

Winter season precipitation anomalies during strong El Niño events. (Source: NOAA. Animation: Tom Yulsman) The animation above shows how winter precipitation during all of the strong El Niño events on record have varied from the long-term average. (Blue-green tones indicate wetter than average conditions.) In most of these events, the bulk of California got a good dousing. Let's hope that this pattern holds this year! But in the 1965/1966 and 1991/1992 events, snowpack in the Northern California mountains — which play a critical role in the state's water supply — didn't get the expected boost. In fact, by my (admittedly unscientific) reckoning, 28 percent of the time strong El Niños have not delivered quite as promised. So if you hear someone say that a specific ski area is going to get hammered with snow this winter thanks to El Niño, you might consider reaching for the 'convenience bag' in the seat-pocket in front of you...

Warmer than average sea surface temperatures dominate large parts of the Pacific Ocean. The large patch of warm water south of Alaska has been dubbed "The Blob." There's an even warmer patch (let's call it "Son of Blob") in the subtropics to the south. Then there's the "Godzilla" El Niño characterized by the spear of warm water along the equator. There's another reason to be just a tad queasy as well: For much of 2015, the Pacific Ocean hasn't looked like anything seen during previous El Niño episodes. In addition to Godzilla lurking along the equator, we've also had "The Blob" — a huge and dynamic pool of extraordinarily warm surface water that's now sitting south of Alaska. (See above.) And now we also have an even toastier gigantic patch of warm water in the subtropics, extending from Hawaii to North America. Let's call this "Son of Blob." (Why not have some fun?) I'm not a meteorologist, just a journalist. But I've been covering El Niño for longer than I care to admit, and I have to say that this is just dang weird. More importantly, experts agree. As Greg Carbin puts it, "It's highly anomalous. We’ve not really seen anything like it in the observed record." Atmospheric scientist David Parsons, director of the School of Meteorology at the University of Oklahoma, agrees that what we're seeing now in the Pacific is, well, dang weird: "We're in a regime we haven’t seen before: a strong warm blob, and a strong El Niño." With that in mind, he jokes that "I’m delighted I don’t have to make seasonal predictions." His point: When conditions are unprecedented, we shouldn't discount the possibility of surprises that defy predictions. That said, there are actually some hints now that The Blob is weakening. So maybe Godzilla will soon splatter it and return the Pacific to a condition that looks more akin to what was seen in prior events. William Patzert, a climate expert at NASA’s Jet Propulsion Laboratory in Pasadena, is convinced this will happen. If it does, we can be more confident that the Godzilla El Niño will deliver desperately needed precipitation not only to Southern California, which El Niño's tend to do, but to the northern part of the state as well, which the odds favor only during strong events.. Quoted in the Sacramento Bee the other day, Patzert had this to say:

At this point – at this particular time – this is too large too fail . . . People like to be conservative. They don’t want to stick their neck out. But this is definitely the real deal.

Patzert is no El Niño newbie. And he is, in fact, that well respected expert I mentioned at the beginning of this post — the one who originally called this El Niño "Godzilla." He sure got that right. So I'm thinking what he says is probably a good bet.

But what about that Thing I'm calling "Son of Blob? In a Weather Underground post today (headlined "Blob Watch..."), Bob Henson says that it:

. . . could take longer to scour out, as [these warm waters] are partially a product of the El Niño that will likely remain in place through most or all of the winter. We can expect this southern blob-like feature to help provide warm, moist air for any Northeast Pacific storms that dive toward California.

So Son of Blob might actually enhance Godzilla's assault? I trust Henson, so perhaps this a good bet too. But we should not forget that in the end, El Niño is something like a bartender. No, I didn't make that up. Deke Arndt, chief of the Monitoring Branch of NOAA's National Centers for Environmental Information, did. It's a metaphor he uses to help us understand that while a strong El Niño might behave reliably most of the time, we can't count on him to do so always. As Arndt wrote recently:

Let’s say you have a favorite establishment, where everybody knows your name, and they bring you “your” beverage on sight. And then one night you go in, and based upon your past experience, you sorta expect the bartender to bring you your favorite beer. Instead, maybe he unexpectedly brings you a warmer-than-normal beer, or even <shudder> a wine cooler. El Niño is like that bartender. Seeing him when you walk in may tilt your odds toward getting your favorite beer, but it’s not a guarantee. In other words, sometimes El Niño is the bartender who doesn’t bring you what you ordered.

To bring this full circle... If you drink enough of that beverage you didn't order, you might get, well, queasy.