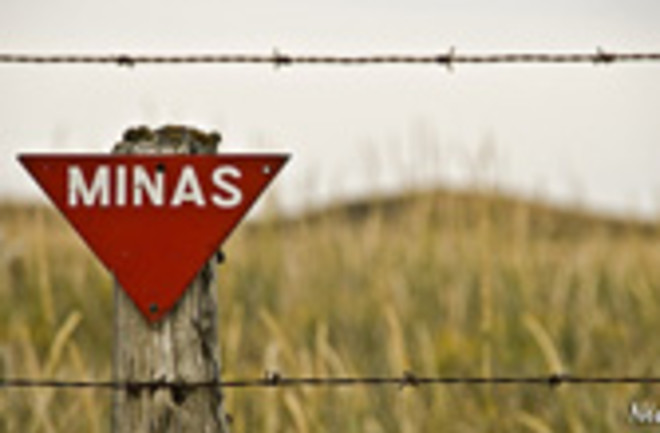 A small crop dusting-style aircraft skims the land, spraying a mysterious solution onto the ground. Within hours, a few spots begin to glow bright green. No, this scene isn't some hair-brained Homer Simpson scheme to use nuclear waste as a fertilizer. Rather, it could be a new way to locate one of humanity's most vile creations: land mines. University of Edinburgh scientists announced today that they've bioengineered a bacteria to glow a bright green when it comes in contact with the chemicals that old land mines leak out into the ground. The project was actually a student creation, and their supervisor, Alistair Elfick, says that they could mix the bacteria into a solution that could be sprayed by air over areas known to be infested with mines. Elfick says the team isn't planning to sell the glowing microorganisms commercially. But if the technique works, countries around the world could reap the benefits. From BBC News:

Each year, between 15,000 and 20,000 people are killed or injured by landmines and unexploded ordnance, according to the charity Handicap International.

Some 87 countries are riddled with minefields, including Somalia, Mozambique, Cambodia, Iraq and Afghanistan.

Related Content: Discoblog: Could Rats Be the Next Sniffing Dogs?

(Elephants in Myanmar and Cambodia are sometimes the victim of mines.)