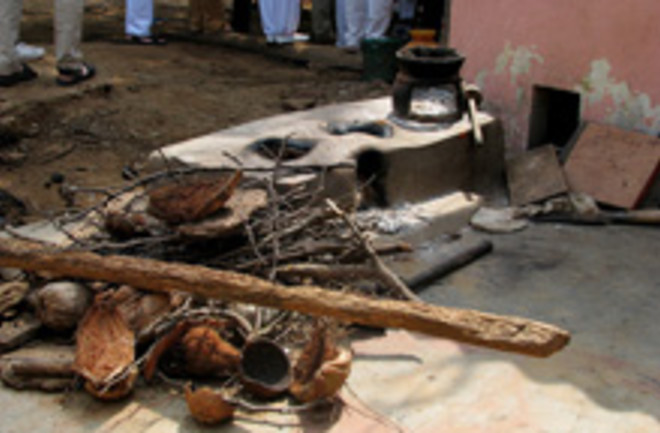 Cooking all your meals on an old-fashioned stove indoors is bad for you and bad for the Earth: The smoke from those fires causes heart and lung problems for millions of people, the soot contributes to global warming and glacier melt, and the need for so much wood drives deforestation. Yet, out of necessity, nearly half the people in the world cook this way. This week, a United States and United Nations-backed effort took the first tiny steps to try to turn that around. Secretary of State Hillary Clinton says that the U.S. will give $50 million in seed money to the new Global Alliance for Clean Cookstoves, an organization with the intention of providing cleaning-burning cooking stoves to families around the world. Other partners will each provide $10 million.

The project will attempt to build on national programmes already underway in India, Mexico and Peru. It aims to introduce modern low-pollution stoves to the homes of 100 million poor people by 2020. Clean stoves run on biomass (with chimneys and clean-burn mechanisms), or gas, or on solar power. [BBC News]

The U.N.'s estimate for the number of people killed by cooking smoke inhalation annually is 1.9 million. That number is just an educated guess, one that sounds serious by being so specific. But whether or not it's close to correct, the health issue is serious:

Think about it; every day, millions of women across Africa and India spend several hours crouched over small fires cooking. Often their homes have no chimneys and poor ventilation. This daily proximity destroys lungs. Small children staying close to their mothers are equally vulnerable. [The Guardian]

To be realistic, though, we're talking about baby steps here. The alliance's backers, Clinton included, are forthright about the enormity of the task: We don't know yet whether the organization will have the support to reach its goal of 100 million replacement stoves, or how efficient those stoves will be.

Stoves that are coming on the market for as little as $20 are 50 percent more efficient than current cooking methods, which are often simply open fires or crude clay domes, backers of the project say. A $100 model can capture 95 percent of the harmful emissions while burning far less fuel to produce the same amount of energy. [The New York Times]

Even if 100 million new stoves are provided to the world's poor, it would account for just one-fifth of the alliance's estimate for stoves that could be swapped out. Plus, even fancy new low-emission stoves don't last forever, Clinton acknowledges, so installing them isn't a one-time deal.

She acknowledged that the American government’s contribution of $50 million was a modest commitment for a problem with enormous implications for billions of people worldwide. “Like anything,” she said, “we have to start somewhere.” [The New York Times]

It might as well be here. That goes for the environmental side of the problem, too. DISCOVER previously has covered

the idea that soot, or "black carbon," is the low-hanging fruit for reducing carbon emissions: Making a dent in it would be easier than major carbon dioxide reductions, and it would do more immediate good. Related Content: DISCOVER: The Easiest Way to Fight Global Warming?

DISCOVER: The Physics of Fire

DISCOVER: Counting Carbon: How Much Greenhouse Gas Does Your Family Produce?