Simply cleaning up soot could work wonders for the climate. 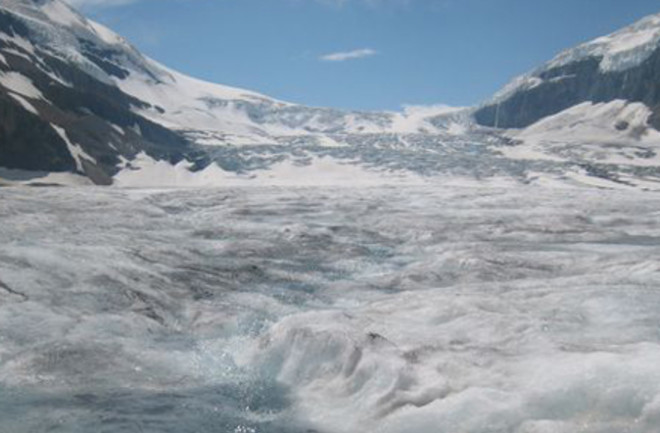 Discussions of climate change often make it sound as if carbon dioxide is the only villain. But climatologists have identified another, less notorious form of carbon that may be nearly as dangerous: soot. The fine, black, powdery pollutant may be responsible for the very different warming trends observed between the Northern and Southern hemispheres. If discovering yet another agent of global warming gets you down, take heart. This one may be a relatively easy target for action that will slow the progress of climate change.

Soot, which climatologists call black carbon, emanates from diesel engines, power plants, the clearing of forests or burning of fields, and open cookstoves common in developing countries. While drifting in the atmosphere or after settling on the ground, soot efficiently absorbs sunlight, warms up, and radiates heat.

Until recently, however, soot’s role in warming has been muddied by the effects of another pollutant, sulfate particles generated by coal and petroleum combustion. Unlike soot, the light-colored sulfates strongly reflect sunlight, cooling the ground below. Early climate research suggested that this effect would more than offset warming from soot. “The cooling impact of sulfate was larger, and the way sulfate interacts with the atmosphere is more straightforward, so sulfate has received more attention,” explains Drew Shindell, an atmospheric physicist at the NASA Goddard Institute for Space Studies in New York City.

But changing pollution trends are magnifying the impact of soot. Measures controlling sulfate pollution from coal-fired power plants, initiated by industrial countries in the 1970s to combat acid rain, have reduced sulfate’s cooling effect. Over the same period, the amount of soot produced by diesel engines and other sources has continued to rise, increasing black carbon’s contribution to warming.

Just how much this soot heats up the atmosphere is still poorly understood. Emissions from cookstoves and farms defy precise quantification. Moreover, the blending of soot and sulfate in the atmosphere produces new particles that have an even greater capacity to absorb sunlight. “That actually enhances the effect,” says Mark Jacobson, a Stanford University atmospheric scientist. “It can double the warming.” There is also the challenge of sorting out whether soot promotes the formation of clouds and, if so, where? High clouds reflect light, cooling the earth, while lower clouds trap heat.

Such uncertainty translates into difficulty in assessing soot’s global role. Veerabhadran Ramanathan, an atmospheric physicist at the Scripps Institution of Oceanography in La Jolla, California, agrees with Jacobson that soot’s net contribution to global warming is second only to that of CO2 produced by human activity. But the two men’s estimates of soot’s impact are about twice as high as the consensus reached by the U.N. Intergovernmental Panel on Climate Change in its 2007 report, which many scientists (including Shindell) still endorse.

What is clear is that soot is driving dramatic change in the Northern Hemisphere. Unlike greenhouse gases, which quickly disperse in the atmosphere, soot congregates above and downwind of its sources. Climate modeling by Shindell, published in March, identifies soot that has blown north as the most likely cause of the Arctic’s faster-than-expected warming. He estimates that increasing amounts of soot (combined with thinning sulfate) caused at least 45 percent of the 2.7-degree Fahrenheit warming observed in the Arctic since the mid-1970s. That dovetails with research by other groups that found soot was as big a contributor as CO2 to shrinking snow cover in the Himalayas. Antarctica, meanwhile, is largely unaffected by soot because it lies far from major population centers.

Shindell says the role of soot in the Arctic and the Himalayas stems largely from what happens when the particles fall back to earth. Soot accumulating on snow and ice reduces their ability to reflect light, causing a local melt that reduces reflectivity even further. The result is a positive feedback loop of warming.

Global shippers entering Arctic waters might create another feedback loop, according to a tally of ship-generated pollution completed last year by the National Oceanic and Atmospheric Administration. At the current pace of melting, the Arctic could contain some year-round navigable shipping lanes as early as 2030. Soot spewing from increasing shipping traffic plying Arctic waters could further darken whatever snow and ice remains.

Then again, by 2030 soot emissions may largely be a thing of the past. Capturing soot is a lot easier than controlling carbon dioxide. Automakers are already phasing in particle traps that cut tailpipe emissions from diesel engines by 90 percent or more. So-called baghouse filters do much the same for coal-fired power plants. Even China and India have begun to battle soot emissions by swapping out biomass and coal stoves for nearly soot-free gas-burning cookers.

The positive impact on climate could be swift because of soot’s fleeting life span, according to Jacobson. Carbon dioxide stays in the atmosphere for decades. (A tiny amount of the CO2 released when Thomas Edison cranked up his pathbreaking Pearl Street generator in Manhattan is still circulating 127 years later.) In contrast, rain and snowfall scrub soot from the sky in a matter of days or weeks. Employ a baghouse to capture soot from a coal-fired power plant, and several months later the atmosphere will be nearly free of that plant’s black carbon. As Jacobson testified at an EPA hearing on soot in May, “Eliminating black carbon can immediately slow down the loss of Arctic ice.”

Policymakers seem to be taking note. This spring, Secretary of State Hillary Clinton, NASA’s James Hansen, and Al Gore called for immediate action against black carbon to protect the Arctic and help prevent catastrophic climate change. In May the eight-nation Arctic Council, which includes the United States, vowed to clamp down on soot. And Congress is considering legislation aimed at reducing it. In the war on climate change, tackling black carbon may be a relatively simple and powerful fix.

Baghouse Filter - A device consisting of a number of fabric bags used to capture particulate pollutants. Air laden with particles is blown up into the filter by fans, and clean air passes out the top.

Sulfates - Particulate pollutants emitted from burning coal and oil. In addition to causing acid rain, these particles are linked to cardiovascular disease and lung cancer.