The breakup — which will probably speed the flow of glacial ice into the sea — is yet another sign of what's to come as the climate warms further. 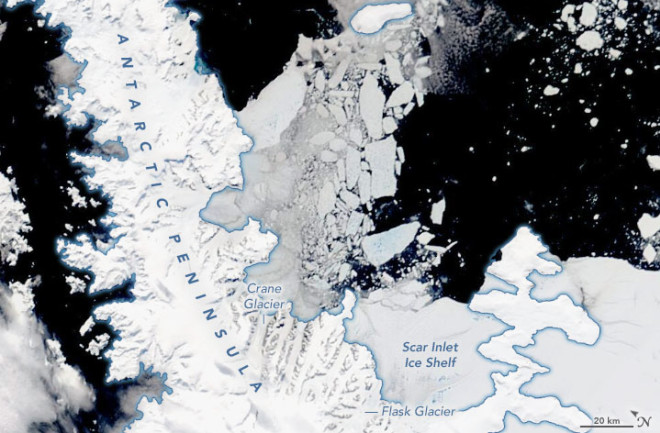 A previously intact slab of frozen sea ice that had been fastened to the shore of the Antarctic Peninsula has now broken up, as seen in this image acquired by the Aqua satellite on Jan. 26, 2022. (Credit: NASA Earth Observatory)

An expanse of sea ice more than three times the size of New York City has torn free from Antarctica and broken up in dramatic fashion.

For 11 years, in one of the fastest warming regions on Earth, the 1,000-square-mile sheet of floating ice had tenaciously held fast to the coastline of the Antarctic Peninsula.

But then, in just a few days, warm winds racing down from the peninsula's mountains delivered a death blow. Between January 16 and 21, the sea ice fractured and broke free from a coastal indentation known as the Larsen B Embayment, taking with it a Philadelphia-sized chunk of the much sturdier Scar Inlet Ice Shelf.

You can see the run up to the event, the breakup itself, and its aftermath, in this animation of satellite images, acquired between January 16 and 31:

An animation of daily images acquired by NASA's Terra and Aqua satellites between January 16 and 31 of 2022 reveals the break up of a vast expanse of Antarctic sea ice. It had been fastened to the shoreline of the Antarctic Peninsula since 2011, helping to hold back the flow of glaciers into the sea. With the sea ice gone, the glaciers likely will accelerate, dumping more ice into the water and thereby helping to raise sea level. (Credit: Images from NASA Worldview. Animation by Tom Yulsman)

"The breakup is the latest in a series of notable events in the Larsen B embayment over the past 20 years," according to NASA. Among these events was the splintering and collapse in 2002 of a larger and far thicker floating slab of ice extending from the land's surface. Called the Larsen B Ice Shelf, it was more than a half mile thick in places.

Scientists had never before witnessed such a large and robust ice shelf disintegrate so rapidly. And so the event nearly 20 years ago made headlines around the world, with The Guardian proclaiming, "Antarctica sends 500 billion tonne warning of the effects of global warming."

Before its demise, the Larsen B Ice Shelf had applied back pressure against glaciers flowing out into the embayment. With that back pressure suddenly released by the shelf's breakup, researchers measured a two- to six-fold increase in the speed of the glaciers, as measured at their centerlines.

Thanks to this acceleration, they began dumping much more ice into the sea, thereby contributing to global sea level rise. The loss of ice from one of these glaciers was so significant that its surface dropped by an astonishing 125 feet in just six months.

After the Larsen B Ice Shelf disintegrated, a thinner lid of sea ice began forming within the embayment during winter. Come summer, warmer temperatures would cause it to melt out. But then in 2011, the sea ice persevered year-round, and it remained steadfast for more than a decade.

Research has shown that this land-fast sea ice, like the burlier ice sheet before it, managed to slow the march of glaciers into the sea — albeit less effectively. With the sea ice gone now too, “the likelihood is that backstress will be reduced on all glaciers in the Larsen B Embayment, and that additional inland ice losses will be coming soon,” says NASA glacier expert Christopher Shuman.

Given the long-term warming of the Antarctic Peninsula, it was only a matter of time before the sea ice would disappear. All that was needed was sufficient weakening, warm summer weather, and a trigger.

Ponds of blue meltwater are seen in this Sentinel 2 satellite image of sea ice filling the Larsen B Embayment on January 18, 2022. One large crack in the ice and several smaller ones are also visible — a prelude to the complete breakup that would begin in earnest the next day. From left to right, the scene is a little less than 20 miles across. (Credit: Copernicus Sentinel data processed by Tom Yulsman)

In fact, just a day before the breakup began in earnest, satellite imagery revealed ominous signs: ponds of meltwater pockmarking the sea ice surface, and fractures beginning to splinter it.

By the next day, very warm, moist air had converged on the Antarctic Peninsula. It was brought there by "an atmospheric river that stretched from the southeastern Pacific Ocean to the Antarctic Peninsula," says Jonathan Wille, a scientist at the Université Grenoble Alpes who studies these features and how they affect ice at the poles.

As the name suggests, an atmospheric river is a long, narrow, fast-flowing feature that carries moisture — not liquid water, as in the case of a river on land, but water vapor. It can also transport large amounts of heat.

Areas of red in this map, generated by a polar-specialized weather forecast model, reveal areas where the atmosphere was transporting large amounts of water vapor in the Southern Hemisphere on January 20, 2022. The atmospheric river that impacted the Antarctic Peninsula shortly before a large sheet of sea ice collapsed there is seen on the right-hand side of the map. (Credit: Jonathan Wille)

Along the peninsula, these rivers can set off another phenomenon that itself contributes to dramatic warming: foehn winds.

The University of Colorado's Rajashree Tri Datta is an expert in how these winds can drive melting of ice. She points out that foehn winds are a common phenomenon, occurring on the lee side of mountains all around the world. In the Antarctic Peninsula, they happen when strong westerly winds hit the high mountains forming its rocky spine.

As the winds encounter the steepening terrain, air is dirven upward, cooling as it goes and thereby forming clouds that precipitate out moisture. "The mountains essentially comb the moisture out of the air," Datta explains.

After reaching the top, the air starts avalanching down the lee side of the mountains. As it races to lower elevations, it compresses and thus warms up. Because it has had the moisture combed out, it warms even more than it otherwise would. (Scientists call this an "adiabatic" process.)

The result: a powerful foehn wind that poses a mortal threat to ice.

And to make things worse, the loss of clouds on the leeward side of the mountains can lead to sunnier conditions, heating things up even more, Datta says.

The warmth and dryness of foehn winds has been known to drive dramatic melting at the surface of ice shelves and sea ice along the coastline of the Antarctic Peninsula, according to Ella Gilbert, a researcher at the University of Reading. "Mostly, this happens in pronounced events that can persist for several days at a time," she says. Temperatures can rise by as much as 25 degrees C (45 degrees F), even in winter.

"I would go so far as to say that the shelf had been primed for years by ongoing warming in the ocean and atmosphere, and that the foehn winds, plus an unusually warm period that preceded its breakup, were simply the trigger," Gilbert says. "Call it the last straw, if you like."

Foehn Winds in a Warming World

Datta notes that they naturally tend to be stronger in winter than in summer. This means their impact can be blunted by the very cold winter conditions. But as climate warming causes temperatures to rise during the shoulder seasons between winter and summer, foehn winds could cause increased surface metling at those times.

"Once this happens, there’s some potential for a sort of cascade effect," Datta says.

The cascade involves a cycle of thawing and refreezing at the surface of ice shelves and sea ice. Refrozen ice has fewer pore spaces within it, so when surface melting occurs again, the meltwater can't leak away as readily. The result: persistent ponds of meltwater that reflect much less sunlight than shiny ice. As the absorb this solar energy, they warm, causing the ice below to thin even further.

"One such extreme foehn-induced melt event occurred in the winter of 2016, producing strong melt over the Larsen C ice shelf," Datta says.

In the future, runoff of meltwater from ice shelves onto more fragile sea ice could spell increasing trouble, a recent study shows. In addition to causing warming and thinning, meltwater ponds could cause the sea ice to flex, leaving it even more vulnerable to fracturing.

Climate warming could have yet another influence as well — on the atmospheric circulation that promotes foehn winds.

The Antarctic continent is encircled by a band of westerly winds that are influenced by complex factors. According to Gilbert, these include both climate warming and the ozone hole that has been opening in the atmosphere over the continent since the early 1980s — factors that tend to have countervailing influences.

The ozone hole tends to result in those winds being pushed outward from Antarctica. That can mean fewer strong westerlies impinging on the Antrctic Peninsula, which in turn can mean fewer strong foehn wind events. Meanwhile, a warming climate tends to result in the westerly winds being pushed closer to the continent, where they could enhance foehn winds.

Thanks to an international treaty phasing out use of ozoen-depleting chemicals, the hole is slowly healing. But as the concentration of greenhouse gases in the atmosphere continues to rise, climate warming is worsening — with no end in sight.

This means it's a decent bet that over time, those westerly winds will blow closer to continent. And this raises the odds that the Antarctic Peninsula will be subjected to more foehn winds that are so deadly to ice.

Note: I want to thank Rajashree Tri Datta for graciously recruiting her colleagues, Ella Gilbert and Jonathan Wille to help answer my questions. I also want to thank all of them for taking the time to offer valuable information and insights. Lastly, in the interest of full disclosure: like Rashashree Tri Datta, I work at the University of Colorado, where I direct the Center for Environmental Journalism.