An animation of false color infrared images from the GOES West weather satellite shows the powerful Bering Sea storm swirling across Alaska's Aleutian Islands. (Images: SSEC/University of Wisconsin, Madison. Animation: Tom Yulsman) As the monster storm that once was Super Typhoon Nuri swept toward the western Aleutian Islands, bringing hurricane force winds and 50-foot waves, it may have been one for the record books. But luckily, there are no reported injuries or significant damage on the sparsely populated islands.

Source: Ocean Prediction Center One measure of the strength of a storm is the atmospheric pressure at its center. The lowest pressure ever recorded in a North Pacific storm was 925 millibars, measured in Dutch Harbor in 1977. The pressure at the heart of the current storm is estimated to have bottomed out at 924 mb, which would make it the strongest on record for this part of the world. (Click on the thumbnail at right to see the estimate from NOAA's Ocean Prediction Center.) Meteorologists don't have an actual measurement of the storm's central pressure when it bottomed out because it happened over the open ocean, not over any weather monitoring stations. Even so, there's no denying the storm's fury and size. To get a sense of just how big this storm is, consider this image from a GOES weather satellite, captured today: 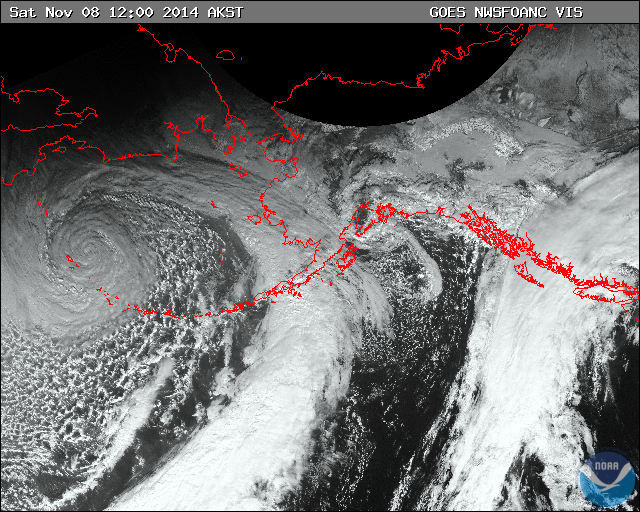 A GOES satellite captured this image of the massive storm swirling in the Bering Sea near the western Aleutian Islands on Nov. 8, 2014. (Source: National Weather Service) The central part of the storm alone is about as big as the entire state of Alaska. Fishing boats featured on the Discovery Channel's Deadliest Catch program were reported to be riding out the storm. “We have from three to five boats in the water in full production right now,” Deadliest Catch executive producer David Pritikin is quoted as saying by Discovery News. “Some are racing back to Dutch Harbor, others will be out there fishing through it. They won’t be able to make it back in time, and they have the quota to catch.” For more details about the storm, including an excellent explanation of how it is expected to help trigger an outbreak of frigid temperatures across the U.S. midsection next week, see Andrew Freedman's story at Mashable.