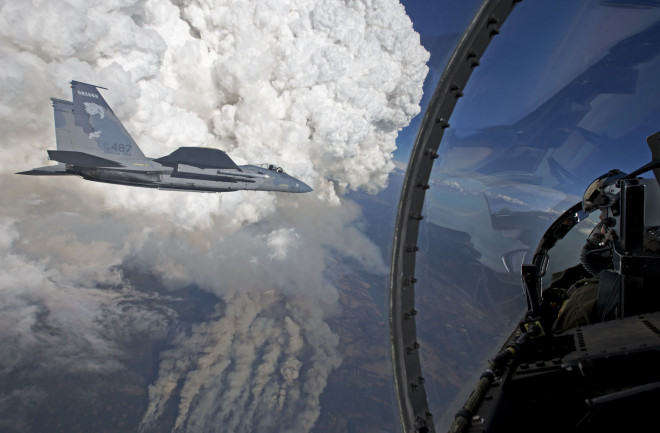 A gargantuan pyrocumulus cloud, as seen from an F-15C fighter jet on July 31, 2014. (Photo: James Haseltine, via NASA Earth Observatory) Rising air currents over wildfires can carry water vapor high into the atmosphere, causing it to cool and condense. If enough water vapor is present and conditions are right, the result can be giant fire clouds, known scientifically as pyrocumulus clouds. These images show what they look like.

A map of smoke over North America on Aug. 4, based on data from the Ozone Mapping Profiler Suite (OMPS) on the Suomi NPP satellite. (Source: NASA OMPS blog) The same rising air currents that cause pyrocumulus clouds to form can also propel smoke particles high into the atmosphere. From there, winds can carry these particles far afield. The image above, from the Ozone Mapping Profiler Suite, or OMPS, on the Suomi NPP satellite, maps the spread of smoke on August 4th across a large portion of North America from the fires in California and Oregon, as well as wildfires still blazing in Canada.