Giant blob of cold water rises from the depths of the Pacific, possibly heralding the arrival of La Niña this fall

This animation shows how temperatures at the surface and subsurface of the tropical Pacific ocean departed from average over five-day periods starting in early August 2017. The vertical axis shows the depth below the surface in meters. The cross-section is right along the equator. Note the blue blob indicative of relatively cool water rising from the depths and spreading eastward. (Source: NOAA ENSO Blog) Here we go again? Following a mild and short-lived La Niña episode in 2016/2017, the climatic phenomenon stands a 55 to 60 percent chance of developing once again this fall and winter. That's the most recent forecast from the National Oceanic and Atmospheric Administration. Based on observations of what's happening in the Pacific Ocean, and modeling to predict what may be coming, NOAA's Climate Prediction Center has issued a La Niña watch, indicating that conditions are favorable for its development. La Niña can strongly shift weather patterns, bringing anomalously cool or warm, and wet or dry, conditions to large parts of the world. In the United States, La Niña tends to bring wetter than normal conditions to the Pacific Northwest and parts of the Midwest. Unfortunately for southern and central California, things tend to dry out. 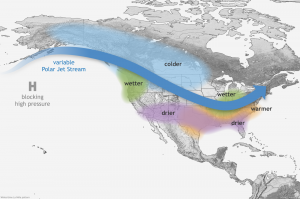 Here's how La Niña tends to influence weather patterns across North America. (Source: NOAA) But it's important to note that with La Niña (or its opposite, El Niño, for that matter), YMV. For example, last winter, despite the presence of La Niña, incredibly heavy precipitation drenched large parts of California. This was thanks to another phenomenon, known as the "pineapple express". A number of factors have climatologists convinced that La Niña is brewing again. Among them are changes to Pacific Ocean trade winds. These ordinarily blow from east to west across the equatorial Pacific, helping to bottle up warm surface waters in the western part of the ocean basin. As a La Niña episode gets going, those winds tend to strengthen, shoving even harder on warm surface waters, pushing them out of the way, and thereby allowing cooler water to well up from the ocean depths. This is precisely what began to happen during August. At about 160 to 500 feet beneath the surface of the Pacific, a blob of cooler-than-average water formed and began rising and spreading to the east along the equator. You can see this blob, called a "kelvin wave," in the animation at the top of this story. The visualization depicts a cross-section of the Pacific Ocean along the equator, and it shows the evolution of the cold blob starting in early August. This shift in conditions in the Pacific had its origins even prior to August. "During the second half of July, the trade winds puffed a bit harder over the western half of the Pacific, likely helping this current Kelvin wave form," writes Emily Becker in NOAA's informative and compellingly clear ENSO Blog. Parts of the blob reached the surface in August, resulting in anomalously cool surface waters along the equator. This is characteristic of La Niña. But it's important to note that this and other features have to strengthen and persist before NOAA will declare the official start of a La Niña episode.

This animation compares sea surface temperature anomalies in the Pacific Ocean on May 12 and Sept. 12, 2017. The blue swath that forms along the equator indicates cooler than normal temperatures that have developed since May. (Images: Earth Nullschool. Animation: Tom Yulsman) In the animation above, watch the equatorial region of the Pacific west of South America. The colors indicate how temperatures at the sea surface vary from the long-term average. The warmish hues along the equator in one of the two frames are indicative of slightly warmer than normal temperatures at the surface in mid-May of this year. In that same frame, orange and yellow tones hugging the west coast of South America reveal particularly warm water — evidence of a "coastal El Niño." This phenomenon sometimes is a prelude to a full-fledged El Niño, in which a spear of unusually warm water extends westward from the coast of South America along the equator. But as the second frame in the animation shows, that's not what happened this time. That second frame shows sea surface temperature anomalies in mid-September. And the spear of blue along the equator indicates a cool-down. Will conditions continue along this path, resulting in a La Niña? That's the forecast of computer models. As Emily Becker writes at the ENSO blog:

The ensemble of models from the North American Multi-Model Ensemble (NMME) is predicting that La Niña will develop this fall, and last just through the winter. Back-to-back La Niña winters are not uncommon, and have occurred at least five times since 1950, most recently in 2010-2011 and 2011-2012.

There are good scientific reasons to feel confident in the model predictions. But as Becker is quick to point out, the interactions between the ocean and atmosphere are very complex. So things may very well evolve differently. One thing is for sure, of course: Time will tell.