The nearly twenty-foot granite slabs, known as the Georgia Guidestones, have sparked controversy around the world. 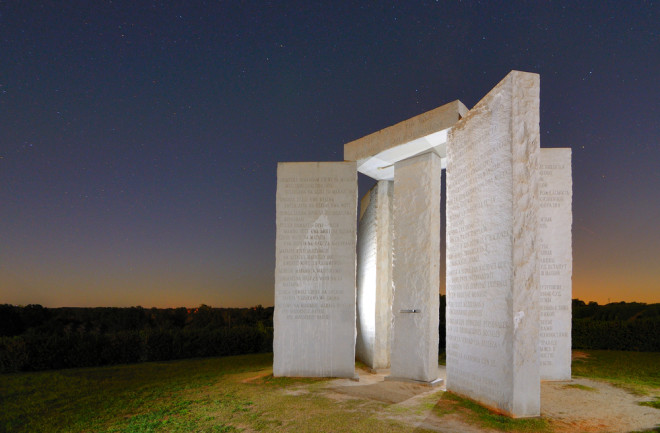 “Planned genocide has begun,” read the Facebook entry on one of the groups I browse daily. The link: a picture of five monoliths looming like an American Stonehenge over a lush and lonely hill in remote Elberton, Georgia. I was only an hour away at the time, and decided to visit them in person.

The nearly twenty-foot granite slabs, known as the Georgia Guidestones, have sparked controversy around the world — praised by Yoko Ono, defaced by conspiracy theorists, featured on the History Channel, and the subject of the conspiracy web series Guidestones. The monument — five upright stones topped by a capstone — weighs nearly 240,000 pounds and is inscribed in eight languages with ten instructions for humans post-apocalypse. Three decades after being erected, the monument’s true purpose is still being argued, and its quasi-commandments can seem either sincere or satanic.

The most controversial instruction is the first: that humanity should be maintained under half a billion. Nearly as controversial is the sixth instruction, which proposes that nations resolve disputes in “a world court.” The stones also boast a few odd astronomical features — a hole through which you can see the North Star each night; a slot through which you can watch the sun rise during the summer or winter solstice; and a hole on the capstone which functions as a solar calendar at noon.

“Let these be Guidestones to an Age of Reason” reads the capstone in classical Greek, Sanskrit, Egyptian hieroglyphics, and Babylonian cuneiform.

The Guidestones were erected in 1980 and have captured the curiosity of astronomy buffs, peaceniks, pagans, and preachers over the decades since. Conspiracy theorists have decoded them; pagans have held rituals around them; graffiti artists have defaced them. They are as riveting for their curious origins and enigmatic intentions as they are for the cacophonous range of responses they evoke in observers.

The monument was commissioned in 1979 by a now deceased, anonymous donor calling himself “R.C. Christian.” According to the also deceased Joe Fendley, then president of the Elberton Granite Finishing Company, Mr. Christian was a tall, well-dressed stranger who showed up in his office on a Friday afternoon and offered to pay a substantial sum of money for the construction of the monument. Fendley sent him over to Wyatt C. Martin, then president of the Granite City Bank.

Within a few weeks, Christian had wired money to the bank and brought in a wooden model of the monument, and the quarrying and construction had begun. Over 4,000 letters were ultimately etched into the surface of the stones. A year later, on March 22, 1980, the Guidestones were unveiled — on a former cow pasture on U.S. Highway 77.

A Visit to the Rough-Hewn Giants

Last August I drove into the sleepy town of Elberton, past signs boasting “Granite Capital of the World,” along remote and winding roads, to see the Guidestones.

I wondered what this American Rorschach would feel like to me. They cast a strange spell that sunny afternoon — outstandingly incongruous on a well kept grassy knoll in the proverbial middle of nowhere. Perhaps if they’d towered over the north rim of the Grand Canyon they would have blended with rock and sky. But nesting like alien tombstones in the rural south, down the road from the white spires of Baptist and Methodist churches, the stones seemed eerie, and brought to mind Henry James’ famous impression of Stonehenge: “You may put a hundred questions to these rough-hewn giants as they bend in grim contemplation of their fallen companions, but your curiosity falls dead in the vast sunny stillness that enshrouds them.”

Meeting the Man Who Knows

A few days later I visited the only man alive who actually knows who built the Guidestones — and he isn’t telling. Banker Wyatt Martin, who is now 82, now lives with his second wife in quaint Greensboro, Georgia.

“You just missed the History Channel,” he greeted me, motioning to a chair on the porch. “They filmed me right here for three hours.” We sat and talked as a light rain drizzled down upon the oak and pecan trees, and Martin speculated that a large part of the enduring controversy is due to the mystery of the stones’ origins.

“People ask, ‘Isn’t it hard being the only one left alive who knows who he really was?’” said Martin. “They could put a gun to my head and kill me, I will never reveal his real name. In my age and my profession you stuck by a promise of confidentiality.

“Last year I went with a few friends over to an old bridge on Lake Oconee and we dumped all correspondence associated with the Guidestones into a metal barrel and burned them. Then we poured the ashes into the lake. It’ll never be known. And that’s what he wanted. He always said if you want to keep people interested, you can let them know only so much.”

At the time the stones were built, Martin reminded me, it was the height of the Cold War, when Armageddon and nuclear winter loomed over America. In a chapbook on the Guidestones that Christian wrote and published, he states, “We are entering a critical era. Population pressures will soon create political and economic crisis throughout the world … We are like a fleet of overcrowded lifeboats confronted with an approaching tempest … There are alternatives to Armageddon. They are attainable.” The guides of the ‘graven stones’ were meant to provide those alternatives.

Was Christian a Christian?, I ask Martin. Martin thinks he was. Others suspect he was influenced by Rosicrucian thought. Rosicrucians formed a European secret society in the 1600’s known as “the brotherhood of R.C.” or the “Fraternity of the Rosie Cross.” According to their first manifesto in 1614, “The word R.C. should be their seal, mark and character.”

Those who believe the stones are influenced by Rosicrucian thought point to the text on the capstone, which echoes the title of Thomas Paine’s famous apologia “The Age of Reason.” Paine was both a deist (one who believes the existence of God can be proven by reason and observation) and a Rosicrucian.

Martin has been hectored for his association with the Guidestones. “Some evangelicals, of which I am one, claim it’s the work of the devil and the Antichrist,” he explains. Conspiracy theorists, meanwhile, claim the stones are the work of the New World Order, a purported global elite that intends to depopulate the world through controlled genocide and then rule it. In 2008, vandals defaced the surface of the slabs, spray-painting “Jesus will beat u satanist” and “No one world government.”

One of the monument’s most prominent conspiracy theorists is computer analyst Van Smith, of Arkansas. His website, Van’s Hardware, offers extensive analysis of the stones.

“The purpose of the monument’s ten edicts,” Smith wrote me by email, “is to establish the groundwork for a totalitarian global government. The proportions of the stones predict the exact height in feet of Dubai’s Burj Khalifa, now the world’s tallest building. Both the Guidestones and the Burj allude to the Tower of Babel. Also be aware that there is a supposed to be a time capsule buried a few feet west of the monument… According to the story, the capsule is only to be opened when signs are made obvious by the monument of an impending global cataclysm. And the North Star sighting hole is probably the feature that was intended for detecting the feared cataclysmic event, if the story I was told is true. The hole is similar to a device created by the Hopi to detect a similar calamity.”

In truth, according to astronomer Loris Magnani, of the University of Georgia, the astronomical features of the Guidestones are mediocre at best. “I visited in order to see if they could really function as an observatory, which Stonehenge could have. The Guidestones are an abacus compared to Stonehenge’s computer. They’re very ordinary. You could do the same thing with concrete in your back yard.

“To see the North Star, which is at a latitude of 34 degrees, you just drill a hole due north at a 34 degree angle. The hardest part is drilling the concrete. As an astronomer, I can tell you there’s nothing much there. As to the instructions on the stone, that’s a whole other issue.”

And it is the instructions, indeed, that speak to our hopes and fears. Though they trace their origins to the Cold War era, they arouse unease today over a different kind of Armageddon. As I stood there before them I thought of our present realities of climate change, soaring global population, and the devastation of species. We were 3.4 billion when the Guidestones were erected. We are now 7 billion headed to 10 billion by 2050. “Be not a cancer on this earth,” the tenth and final inscription on the stones commands. “Leave room for nature. Leave room for nature.” That afternoon, those rough hewn giants could not have been more eloquent.