A new study challenges the long-held view that the destruction of 13th-century societies in the heart of Asia was a direct result of the Mongol invasion. 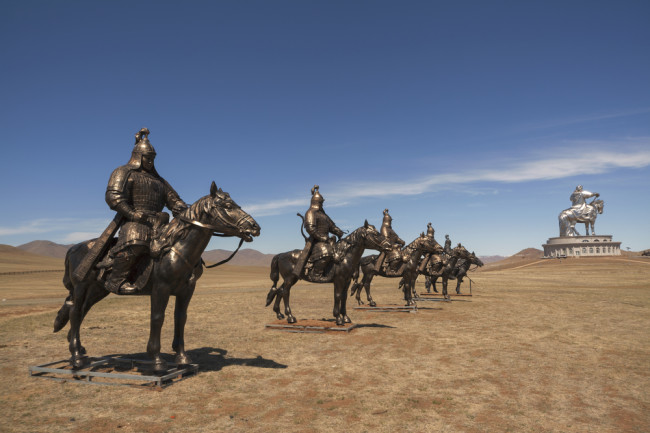 In 1206, Genghis Khan began the Mongol invasion, leading a horse-driven bow-wielding military force that swept through much of modern-day Asia into the Middle East and Eastern Europe. Over the course of the century-and-a-half run of the Mongol Empire, about a quarter of the world's total land area was conquered and an estimated 40 million people were slaughtered. Today, the name of Genghis Khan remains a byword for brutality, terror and military power. But, according to new research, Khan had an unexpected ally in his conquests: climate change.

A study led by the University of Lincoln, UK, claims that dryer conditions may be to blame for the collapse of medieval civilizations along Central Asia’s rivers, rather than the bloody invasions in the 13th century. Researchers conducted analysis on the region and found that changing hydroclimatic conditions have led to the fall of civilizations around the Aral Sea Basin in Central Asia, as farmers couldn’t sustain their irrigation-based agriculture with increasingly low water levels.

“Our research shows that it was climate change, not Genghis Khan, that was the ultimate cause for the demise of Central Asia's forgotten river civilizations,” said Mark Macklin, a director of the Lincoln Centre for Water and Planetary Health at the University of Lincoln in a statement.

Unlike the 7th and 8th-century Arab invasions — after which Central Asia recovered quickly because of favorable wet conditions — a drought during and following the Mongol destruction reduced the resilience of the local population and led to large-scale food shortages. The dry periods took what even the Mongols couldn’t: the long history of river-fueled food cultivation on which these societies prospered.

The research focused on the archaeological sites of the Otrar oasis, once a Silk Road trade hub located at the meeting point of the Syr Darya and Arys rivers in present southern Kazakhstan. Scientists investigated the region to determine when the irrigation canals were abandoned and studied the past dynamics of rivers whose waters fed the canals. The desertion of water systems matches a phase of riverbed erosion between the 10th and 14th century CE, which coincided with periods of droughts rather than with the Mongol invasion.

Transoxiana (“what is behind the Ox river”) is the ancient name of a civilization that once lived around the Otrar oasis, occupying the portion of Central Asia corresponding approximately with modern-day -stan countries: Uzbekistan, Tajikistan, southern Kyrgyzstan and southwest Kazakhstan. During the 5th century rule of the Sassanids - the last Persian imperial dynasty before the Muslim conquest - the region was a major cultural center and flourished due to the wealth derived from the Northern Silk Road, an ancient trackway providing trade, military movements and cultural exchange between China and the west. The Islamization of Transoxiana began during the 7th century rule of the Arabs, who named the region Ma-Waran-Nahr ("beyond the river").

When Genghis Khan invaded the civilizations around the oasis in 1219, he assigned the Transoxiana to his second son Chagatai, and the region became known as the Chagatai Khanate (a political entity ruled by a khan). According to Rashidaddin, a Persian historian who lived under his reign, Chagatai was a just and competent ruler (although “just” certainly had a different meaning back then).

In 1369, Timur, a Turco-Mongol conqueror who founded the Timurid Empire, became the effective ruler of Transoxiana, his home province. As he wasn’t a direct descendant of Genghis Khan, Timur couldn’t claim the title of khan, and the title of Caliph was limited to the tribe of the prophet Mohammad. Timur faced this challenge by creating a myth and image of himself as a God-sent superhuman, which legitimized his reign. Timur “the Lame,” a nickname he got after being knocked off his horse during a battle, sparked the Timurid Renaissance, a period where art and architecture flourished in Transoxiana.

As the region’s irrigation system fell out of use and the Eurasian arm of the Silk Road gradually lost its importance, so did Transoxania. By the end of the 18th century, there were only 40 families remaining in Otrar compared to around 5,000–7,000 in the 14th century, and the irrigated area had declined to about 1.93 square miles (5 square kilometers). Today, Otrar is a ghost town.

MindCan't Get a Certain Song Out of Your Head? Here’s What Makes It an Earworm
Recommendations From Our Store