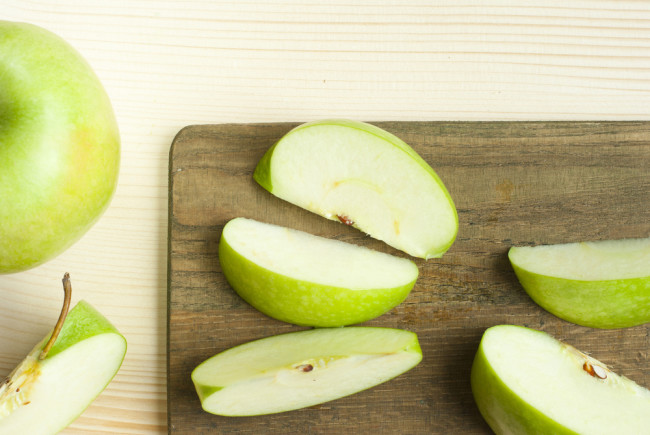 Fruit salad enthusiasts, take heart. The unappetizing browning of sliced apples could be a thing of the past thanks to genetically-modified fruits that resist oxidation. The apples, currently being grown in test plots in the U.S., are under review by the USDA and currently open for public comment. Approval appears likely

Apples' color change is due to a process called "enzymatic browning

." When the fruit's insides are exposed to oxygen, that oxygen reacts with an enzyme called polyphenol oxidase, causing the apple to turn brown. Tricks to prevent the browning include applying lemon juice or, for large food service companies, a chemical antioxidant called calcium ascorbate. (That's what allows places like McDonald's to sell bags of sliced apples.) But researchers in Australia came up with a way to eliminate the need for costly chemicals by preventing browning before an apple is cut. They inserted extra copies of the enzyme-producing gene into the apple's genome and found that it actually caused the whole enzyme-production process to shut down. No oxidizing enzymes means no browning. Now a Canadian company has licensed the technique for producing these brown-proof "Arctic" apples

(called so because they are perpetually white, one suspects) in two varieties: Golden Delicious and Granny Smith.

by the U.S. Department of Agriculture determined that the Arctic apples are as harmless as their conventional counterparts and have given Okanagan Specialty Fruits the green light to grow the Arctic varieties on test plots in New York and Washington states. Official USDA approval is in the works; the proposal for deregulation of Arctic apples is open for public comment until January 30. And the public is definitely commenting. Some oppose genetic modification as a concept, and don't want altered apples in fields or food supply. Others say that non-browning apples will encourage more kids to eat the healthy snack food. If the apples are approved, most likely in the next couple months, it will still be a couple years before the fruits make their way to grocery stores. Image credit: clearimages/Shutterstock