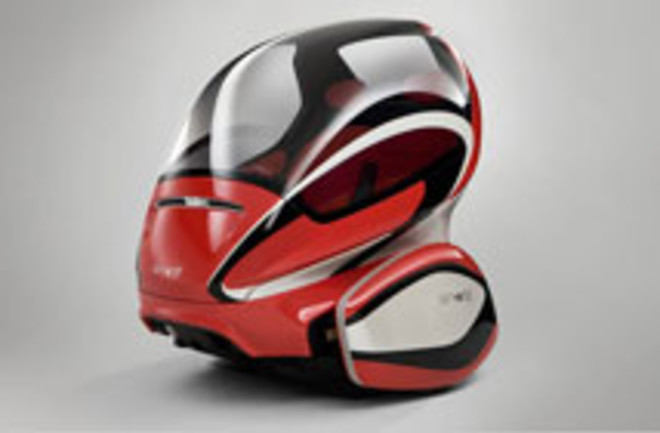 What looks like a giant helmet, can potentially zip through congested city streets, has eco-friendly bona fides, and can "talk" with other vehicles on the road? It's the new 2-person EN-V, an "Electric Networked Vehicle" from GM--a concept car that the company hopes will change the way people in crowded cities drive in the future. GM unveiled several models of the helmet-shaped concept vehicle in Shanghai. The 2-wheeled vehicles, built in collaboration with Segway and GM's Chinese partner S.A.I.C., are powered by electric motors and can travel up to 25 miles on a single charge.

The two-seater EN-V is also a third of the length of a regular car at 1.5 meters [about 5 feet]. It will be equipped with wireless communication and GPS-based navigation that will help it avoid accidents and pick the fastest routes based on real-time traffic conditions, GM says [The Wall Street Journal].

A driver could either control the car manually or could put it into the more relaxing autonomous mode. Says GM executive Kevin Wale:

“It provides an ideal solution for urban mobility that enables future driving to be free from petroleum and emissions, free from congestion and accidents, and more fun and fashionable than ever before” [The New York Times].

But don't expect to see the EN-V on roads anytime soon. GM says the concept car is meant to showcase “what might be possible by 2030,” when infrastructure for networked vehicles might be in place. The company says that if the EN-V is eventually put into production, it will cost less than a small car but more than a moped. GM's decision to unveil the EN-V in Shanghai underscores China's importance for GM's future plans. It is

GM's second-largest market after the United States and a strategic battleground for all foreign automakers, with the likes of Volkswagen AG (VOWG.DE) and Toyota fighting fiercely for bigger market share [Reuters].

The country also has some of the most congested cities in the world, making it well-suited for tiny cars like GM’s EN-V. The EN-V, however is not GM's first eco-friendly offering. Its Chevrolet Volt plug-in hybrid is slated to hit showrooms later this year. Here's a closer look at the new EN-V in action. Related Content: 80beats: In the Commute of the Future, Drivers Can Let a Pro Take the Wheel 80beats: An Electric-Car Highway in California, But Just for Tesla 80beats: How Would You Like Your Green Car: Hydrogen-Powered, or With a Unicycle on the Side? 80beats: What Does GM’s Bankruptcy Mean for Its Much-Hyped Electric Car? DISCOVER: 6 Blue-Sky Ideas for Revolutionizing the Automobile (photo gallery) DISCOVER: The Next Source of Green Energy: Your Car ItselfImage: General Motors