From 300 Miles Up, Satellites See Water Crisis in India's Future 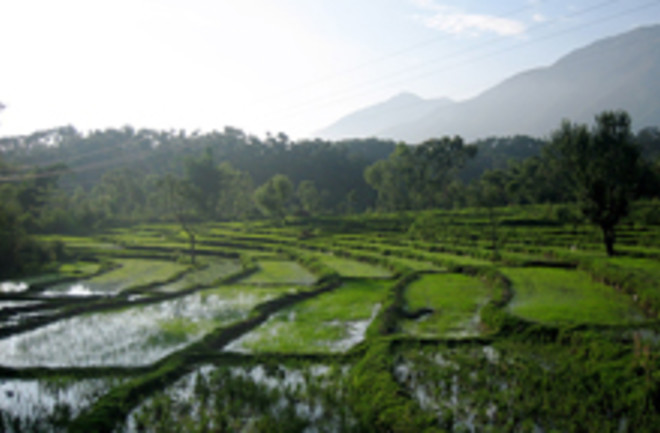 The groundwater of northern India is being drained away by irrigation faster than it can be replenished by the annual monsoon rains, and new satellite data shows that the process is accelerating.

In an area that’s home to about 10 percent of the world’s people, that could be a recipe for disaster, policy experts say. A growing population with an increasing standard of living will only boost the demand for groundwater, a trend that could eventually lead to a reduction in agricultural yields, shortages of potable water and an increase in societal unrest [Science News].

The Gravity Recovery and Climate Experiment (GRACE) is comprised of a pair of satellites that measure subtle variations in the Earth's gravity, caused by the movement of water either in the oceans or under the ground.

Most famously, GRACE has recorded the shrinking of ice sheets; it has also detected shifting ocean currents, the desiccation of droughts, and the draining of large lakes [ScienceNOW Daily News].

Now two new studies of GRACE's data have revealed the loss of groundwater from northern India; once water is pumped up from the aquifers for use in irrigation, it either flows away from the region or evaporates. The two studies, published in Geophysical Research Letters [subscription required] and Nature, focus on different regions of northern India, but came to the same general conclusions. The first study looked at a 1,200-mile-long swath of land bordering the Himalayas and including the New Delhi area. The researchers found that

groundwater was being pumped out 70% faster in this decade than the Central Ground Water Board of India estimated it was in the mid-1990s. The apparent surge in withdrawal would have been large enough to turn a once-stable water table into a falling one that demands ever-deeper wells and bigger pumps and may draw in salty or polluted water [ScienceNOW Daily News].

Over the course of this decade, researchers estimate that the water table fell about four inches each year. Meanwhile, the Nature study examined a smaller, more arid region in India's northwest, and found that the water table has dropped 13 inches each year between 2002 and 2008. Rainfall in the region was normal over those years, so the changes must be due to groundwater depletion, researchers say. The net loss of water in the northwest aquifers is three times the amount of water contained in Lake Mead, the largest reservoir in the United States. We may see many similar studies in the years to come, if populations continue to boom and water becomes a scarcer resource.

Governments in many parts of the world often aren’t forthcoming about groundwater or other resources within their borders, so using remote sensing data is the only way to track usage trends for those resources, says Jay Famiglietti, a hydrologist ... and coauthor of the Nature report. “Big movements of water can’t hide from GRACE,” he notes [Science News].