Freakishly warm air has again surged over the North Pole, and sea ice is breaking up north of Greenland — in winter

Meanwhile, frigid polar air has spilled south into Eurasia and western North America. Is there a connection to human-caused warming?

A weather model forecast for how near-surface temperatures should vary from the long-term mean between Feb. 24th and 26th, 2018. Pinkish colors over the North Pole indicate temperatures near or above freezing. (Source: ClimateReanalyzer.org) It's happening again: In the dead of winter, warm air from the south is surging across the Arctic toward the North Pole. Today, weather models suggest that temperatures there have indeed soared to above freezing. Meanwhile, cold polar air has spilled south into Eurasia and western North America. It's almost as if someone left the Arctic's refrigerator door open, allowing its frigid air to pour out and warm air to flow in. While dramatic warming events like this have happened before, a recent study shows that they are becoming more frequent and intense. In the study, scientists looked at winter air temperatures over the Arctic Ocean from 1893 to 2017. They found that since 1980, an additional six Arctic winter warming events have been occurring each winter at the North Pole, and they're lasting about 12 hours longer, on average. You can see what's happening right now in the Arctic by watching the animation above. It shows weather modeling forecasts for temperature anomalies near the surface, starting on Saturday Feb. 24th and continuing for about two days. The colors indicate the degree to which temperatures are departing from the long-term average. Look for a large red and pink blob flowing north from Greenland toward the North Pole, located where the hatched lines cross. The pink is indicative of the most dramatic warming. Looking further ahead, weather models are forecasting that on March 1, another large blob of freakishly warm air will begin surging toward the pole, this time from the Pacific. The current surge is not just a one-off. Temperatures at Cape Morris Jesup on the northern coast of Greenland just 400 miles from the North Pole have risen above freezing six times since mid-February. Previously, this weather station has experienced above freezing temperature in winter only briefly during February in 2011 and 2017. Overall, the northernmost reaches of the Arctic, located at 80° north latitude and above, have been running a record-setting fever for weeks now, as this graphic from climatologist Zack Labe shows: https://twitter.com/ZLabe/status/967838618252320768 The warm air flooding into the Arctic has come from powerful storms moving up from the south, and also a phenomenon known as a "sudden stratospheric warming event." More about these factors in a minute, but first, let's look at the impacts of the warming and the storminess. 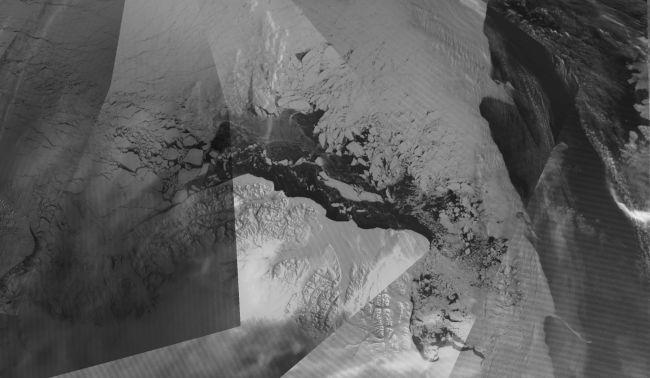 Sea ice north of Greenland and not far from the North Pole has fractured, opening an area of open water about 225 miles long. (Source: NASA Worldview) The image above, acquired by NASA's Terra Satellite on Feb. 24, 2018, shows one startling impact. The sea ice north of Greenland has fractured, allowing a large area of dark open water to form. From left to right, the most ice-free area is about 225 miles long - a little longer than the distance between Washington and New York City. Any sort of large opening in the sea ice north of Greenland is abnormal. This is where thick, old sea ice once dominated. And even at the end of summer in September, this area is normally ice-covered. "This has me more worried than the warm temps in the Arctic right now," says Mike MacFerrin, a University of Colorado scientist specializing in ice sheets. "That sea ice north of Greenland [is] among the last vestiges of old, thick sea ice existing in the Arctic ocean. Break it apart, it can circulate straight out into the Atlantic come summer. We'll see what comes," he wrote in a Tweet this morning. Other scientists are concerned as well. "This large open water area is very unusual," says Lars Keleschke, a physicist and sea ice expert at the University of Hamburg, writing in a Tweet yesterday. "I haven't seen a similar event like this before in the almost 25 years I now work with satellite data." https://twitter.com/seaice_de/status/967679640402874369 The animation above shows the ice opening up over the course of 12 days, starting on Feb. 12. Also check out the graph of temperature at Cape Morris Jesup on Greenland's northern coast showing temperature excursions above freezing. The opening in the winter sea ice north of Greenland is not an isolated incident. In the Bering Sea off Alaska's west coast, a vast expanse of sea ice about the size of Wisconsin has vanished. This has exposed towns along the coast to brutal battering by waves and tidal surges.

SEE ALSO:Rather than growing like it should in winter, sea ice off Alaska has been shrinking dramatically 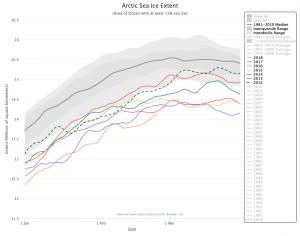 A chart of Arctic sea ice extent for this time of year shows 2018 running at record low levels. (Source: NSIDC) Looking at the Arctic region overall, sea ice extent is running at record low levels as we head into March - just as it should be building to a peak in extent at the end of winter later in the month. What's going on? In the big scheme of things, the Arctic is continuing to warm and change more rapidly than any other region on Earth. This is a consequence of our emissions of heat-trapping carbon dioxide and other greenhouse gases. And if we continue with business as usual, the changes will likely intensify. But a sudden, dramatic warming of the high Arctic like the one that's happening right now is a shorter-term phenomenon influenced by a complex interplay of factors. To be sure, these include natural ones. But research suggests that human-caused climate change could also be playing a role. Right now, the proximate causes of the warm air flooding into the Arctic are an unusual split in a large feature called the stratospheric polar vortex, as well as storminess. The polar vortex is an area of low pressure that forms high in the atmosphere in fall and winter. It is girdled by strong westerly winds circulating around it. These winds are revved up by the very large contrast in temperature between the high and mid latitudes. And this helps to bottle up frigid polar air in the high north. But sometimes, disturbances propagating upward from the lower atmosphere can perturb the vortex. For simplicity's sake you can visualize what happens like this: The disturbances whack the stratospheric polar vortex, causing it to wobble like an unstable spinning top. The wobbling, in turn, weakens the girdling winds, and sometimes even reverses them. This allows surrounding air at an altitude of about 30 miles up in the stratosphere to fall inward toward the northernmost reaches of the Arctic. As it falls inward, the air gets squished, causing sudden warming. In fact, the air temperature in the stratosphere can rise by a whopping 50 degrees C in just a few days. And as this sudden stratospheric warming progresses it begins to influence the atmosphere closer to the surface, including the jet stream winds that flow from west to east. 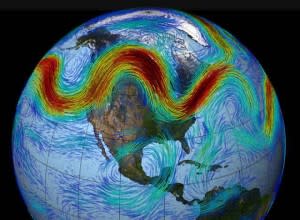 A wavy jet stream pattern, with large northward and southward pointing lobes. (Source: NASA) The upshot of this complex chain of events is that the jet stream itself can become distorted, with big lobes projecting south and north. Frigid air normally bottled up near the pole can spill into southward lobes, bringing unusual chill much farther south than normal. Similarly, warm air can surge up into northward lobes. You can see what this looks like in the image at right. This is precisely what has been happening lately - but on steroids. It all began in mid-February, when the polar vortex got whacked really hard, triggering a sudden stratospheric warming event that didn't just make the vortex wobbly. It actually split the vortex in two. One piece spun its way south over the Western United States, while another slid over Eurasia. Both of these vortices brought bone-chilling Arctic cold with them. At the same time, this weird split in the polar vortex opened a gap in the Arctic. This ultimately allowed warm air to flood north toward the pole. Storms moving up from the Atlantic also have contributed to the unusual warmth by sweeping additional mild air north. As the Arctic has warmed more than lower latitudes, the temperature difference between the regions been been reduced. Since that difference helps drive the jet stream and polar vortex winds, they should be weakening - at least from a theoretical perspective. And there is, in fact, evidence that the jet stream winds have slackened, becoming wavier in the process, with more exaggerated northward and southward projecting lobes. Multiple studies have also shown that the polar vortex itself has actually weakened over the past 30 or so years. Moreover, research shows that sudden stratospheric warming events should become more common as the world warms. Scientists are hard at work teasing out all of these complex details. Natural climatic variability always operates in the background, influencing what's happening. But scientists have long been concerned that human-caused warming of the Arctic would influence these events as well. And there is some evidence that the loss of Arctic sea ice in particular is making sudden stratospheric warming events and their attendant weather impacts more likely. "There are theoretical reasons to think that sea ice declines are driving the observed patterns of unusual warmth and cold in different regions," says Torben Königk, a scientist with the Swedish Meteorological and Hydrological Institute specializing in Arctic climate variability. "But we don't understand what's going on yet." In fact, his own research suggests that natural variability could be playing the dominant role. Other studies suggest otherwise. "We still need more research," he cautions. Declines in sea ice might still be implicated. "We cannot yet rule it out or in." Some might take solace in that uncertainty. I don't. I always come back to the words of Columbia University's Wallace S. Broecker, a geoscientist known as the grandfather of modern climate science. "The climate system is an angry beast and we are poking it with sticks," he has famously said. Expanding on the idea in an interview with a N.Y. Times reporter 20 years ago, he said this: "The earth's climate is very volatile; it can do some weird things." Given what's happening in the Arctic right now, it sure seems like he was right.