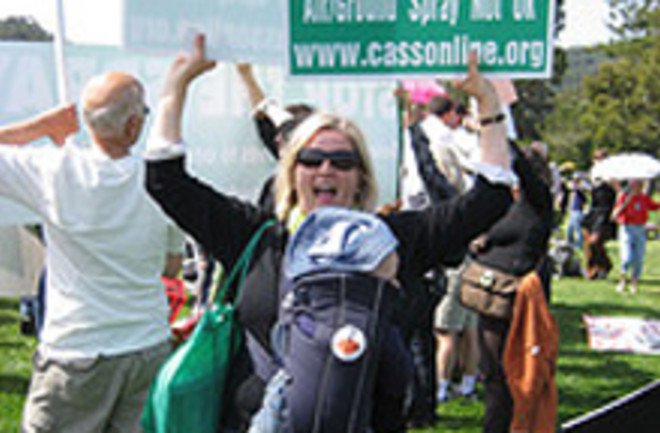 California residents need no longer worry that anti-moth pesticides will rain down from the sky onto their houses. But they should still be on the lookout for thousands and thousands more moths. The light brown apple moth, native to Australia, invaded northern California in March 2007 and state agricultural officials say it is a major threat to many different crops [strike]proceeded to chow down on crops[/strike]. Initially, the state planned to spray moth-infested areas, including residential ones, with a chemical that acts as a phony pheromone, mimicking the female scent and throwing the males off course so they don't mate. According to The New York Times, there were "numerous complaints" of respiratory problems after the chemical was sprayed last November. And after an outcry from Northern Californians who didn't want it in their town, Gov. Arnold Schwarzenegger relented and changed course. The state still plans to spray agricultural areas, but will now battle apple moths in the urban areas by sending in sterilized moths. Starting next year and accelerating in 2010, California plans to release tens of thousands of light brown apple moths, all of which will be sterile. As the [strike]genetically engineered[/strike] moths unsuccessfully try to mate, researchers hope, the moth population will crash. We wrote last month about a similar situation in Malaysia, where some scientists want to annihilate the population of dengue-spreading mosquitoes by engineering millions of male mosquitoes to have children that would die shortly after their birth. That kind of genetic tampering has made plenty of people nervous, and how effective it will be remains unclear. But on the other hand, the political alternative might be to combat pests with more chemicals—in some places, there's even a chorus to bring back DDT as the answer to the malaria menace, though DDT would do as much harm to agriculture as it would do to the moths, according to the Christian Science Monitor. The best answer, of course, it doing as much as possible to keep invasive species out in the first place. But at least Californians haven't gone down the dark path of sending in another invasive species to kill the moths. Image: flickr/Chance Gardener