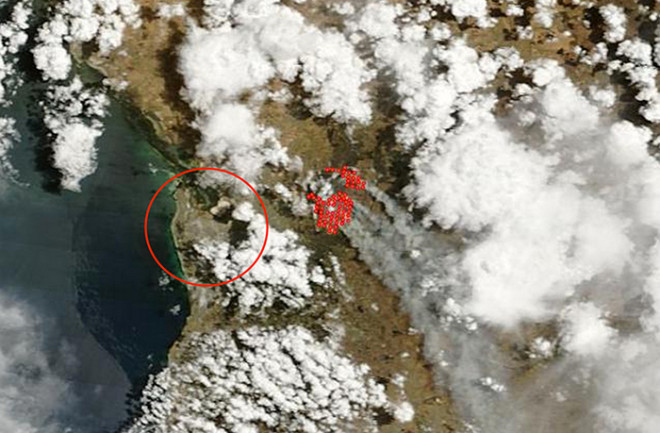 Plumes of smoke stream from a bushfire raging near Adelaide in South Australia, as seen by NASA’s Terra satellite on Saturday (1/3/15). The red dots indicate areas where the satellite sensor detected fire. The city of Adelaide is circled. (Source: NASA) A bushfire visible from space is raging just outside the city of Adelaide in South Australia. The blaze has burned 42 square miles so far, an area about twice the size of Manhattan. Five homes are confirmed destroyed, and dozens more have likely been lost. This is said to be the worst bushfire in the area since the Ash Wednesday inferno in 1983. More than 70 lives were lost in that catastrophe.

The #Adelaide#bushfire is still raging out of control tonight. Check this amazing photo of nature at its worst :( pic.twitter.com/1NQEBADNYO — シ Ed Gex (@EdDJGex) January 3, 2015

Temperatures have been soaring in southeast Australia over the past week, reaching almost 110 degrees F (43 C) on Friday.

November in Australia was the warmest on record, according to the Australia Bureau of Meteorology. So was the spring season overall (September, October and November):

Seasonal mean temperatures, averaged nationally, were 0.1 °C warmer than the previous record set just 12 months ago, during spring 2013. Temperatures were 1.67 °C above the 1961–1990 average, the largest such departure from the long-term average observed since national records began in 1910.

Australia also was exceedingly dry in November, with rainfall averaging just 22 percent of the historical mean nationwide. The dry conditions extended to parts of coastal South Australia. To close out this post, I'll share some photos posted to Twitter of the South Australia bushfire:

Pictures like this one is very distressing I hope this little guy had someone to help him South Australian #Bushfirepic.twitter.com/j6dlkYZjA8 — Alyson Jayne (@ASkySoPurple) January 3, 2015

This is the huge blanket of smoke over city right now as #Adelaide#bushfire still out of control (photo Mal Brown) pic.twitter.com/OvOTdzp8iU — シ Ed Gex (@EdDJGex) January 3, 2015