Florida's Governor: If you need to evacuate and haven't, Hurricane Matthew "will kill you"

An animation of infrared imagery from the GOES-13 weather satellite shows Hurricane Matthew swirling through the Bahamas. The images were acquired at 11:45 p.m. EDT Wednesday, and 3:45 a.m. and 7:30 a.m. on Thursday (Oct. 6). (Source: Cooperative Institute for Meteorological Satellite Studies) Hurricane Matthew is churning through the Bahamas this morning and is expected to approach Florida later today as a potentially catastrophic Category 4 hurricane.

SEE ALSO: Hurricane Matthew poses an extreme threat to Florida — and could even loop back to pummel the state twice

The largest mandatory evacuations in the United States since Hurricane Sandy in 2012 are now underway, with authorities ordering 2 million people to get out of harm's way in coastal Florida, Georgia and South Carolina. https://twitter.com/CNN/status/784036579081850880 Matthew has already killed at least 28 people, most of them in Haiti. But despite that record of devastation, some Floridians evidently are choosing to hunker down. This prompted blunt words from Florida Governor Rick Scott this morning, who urged people to evacuate before it was too late, as reported by CNN:

This is serious . . . Don't take a chance. A small movement [of the storm] could mean a lot. That's why we have to prepare for a direct hit. So again, if you need to evacuate and you haven't, evacuate. This storm will kill you. Time is running out. We don't have that much time left.

As I'm writing this Thursday morning, Matthew is already beginning to be felt in the Miami area. Radar imagery shows its outer rain bands approaching the city: 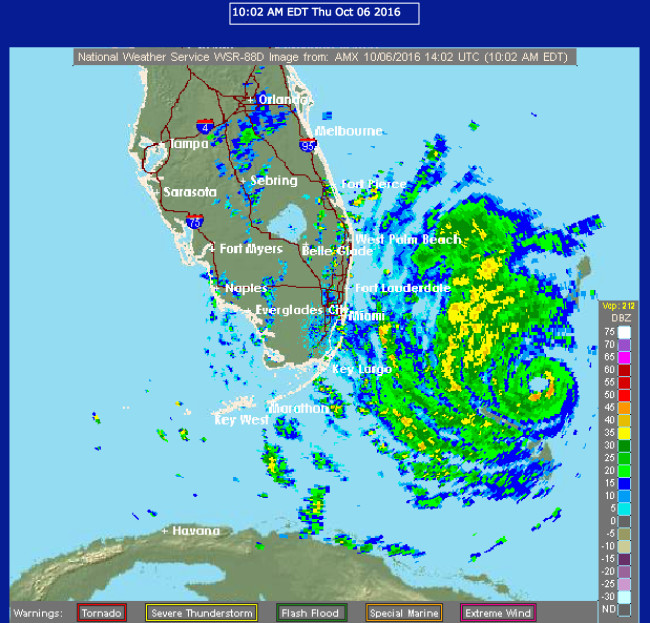 Long--range radar imagery shows Hurricane Matthew's outer rain bands nearing Miami, Florida at 10 a.m. local time on Thursday, Oct. 6, 2016. (Source: National Weather Service) Miami is expected to experience tropical-storm-force winds. But as of 11 a.m. EDT on Thursday, a hurricane warning was in effect for a large reach of the Atlantic coast stretching from north of Golden Beach, Fl. all the way to Edisto Beach in South Carolina. Lake Okeechobee in Florida is also included in the warning area. The National Hurricane Center is warning that:

Matthew is likely to produce devastating impacts from storm surge, extreme winds, and heavy rains in the central and northwestern Bahamas today, and along portions of the east coast of Florida tonight.

But the NHC also emphasizes that even small changes in the track of the storm could have very big effects on its impacts:

When a hurricane is forecast to take a track roughly parallel to a coastline, as Matthew is forecast to do from Florida through South Carolina, it becomes very difficult to specify impacts at any one location. For example, only a small deviation of the track to the left of the NHC forecast could bring the core of a major hurricane onshore within the hurricane warning area in Florida and Georgia. However, a small deviation to the right could keep the hurricane-force winds offshore.

Here is what the storm looked like to the GOES-13 weather satellite this morning, as it was churning through the Bahamas: 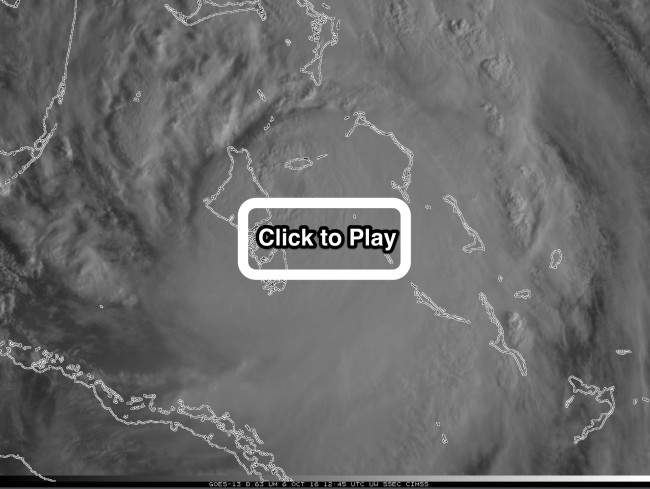 Visible Imagery acquired by the GOES-13 weather satellite early in the morning of Thursday, Oct. 6 shows the center of Hurricane Matthew moving northwestward between Andros Island to the west and New Providence Island to the east. Nassau, the capitol of the Bahamas, is on New Providence Island. (Source: Cooperative Institute for Meteorological Satellite Studies) In its 8 a.m. EDT public advisory, the National Hurricane Center reported that Matthew's eye was approaching Andros Island and New Providence in the northwestern Bahamas. At that time, Nassau, the Bahamian capitol, was experiencing sustained winds of 50 mph and gusts 61 mph. Things no doubt are already worse.

SEE ALSO: After exploding on Friday, Hurricane Matthew has weakened a bit, but it still remains a ferocious Category 4 storm

https://www.youtube.com/watch?v=oTGtS6FXqqY Lastly, check out the broader view above. The animation, consisting of GOES-East satellite imagery acquired between Sept. 30 and Oct. 3, shows Matthew becoming a major hurricane in the Caribbean. The storm exploded to Category 5 status late on Oct. 1, but then weakened the next day to Category 4. On Oct. 3, Hurricane Matthew was pummeling Haiti and Jamaica.