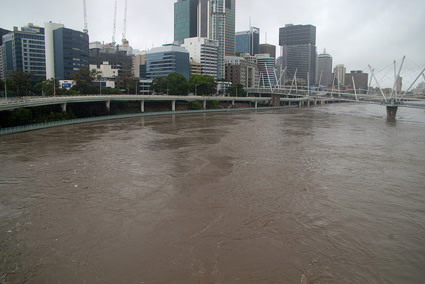 The flooding created by enormous downpours near Brisbane in eastern Australia shows no signs of abating, and that region is now bracing for things to go from bad to worse. Heavy rains pounded Brisbane's region, called Queensland, in December. And things really started to get bad yesterday, when flooding caused by the constant rain sent a wall of water—evocatively being called an "inland tsunami"—crashing through the nearby town of Toowoomba. Brisbane, which is Australia's third-largest city at about two million people, in next in the crosshairs.

Normally it is protected from periodic flooding of the Brisbane river by the Wivenhoe dam, 80 kilometres [50 miles] away. But Wivenhoe is already 81 per cent over capacity after last month's heavy rains saturated Queensland. To save Brisbane from flooding, officials began releasing water from Wivenhoe last month. But because of the inland tsunami now hurtling towards the city, officials have increased the amount of water released from 140 million tonnes yesterday to 344 million tonnes today. [New Scientist]

But there's only so much they can do. As of this morning, the Christian Science Monitor reports

at least 30 deaths and 78 missing, with the number expected to grow as flooding threatens Brisbane.

[Brisbane] Mayor Campbell Newman warned 6,500 homes, businesses and other properties were likely to be flooded by Thursday. "Today is very significant, tomorrow is bad, and Thursday is going to be devastating for the residents and businesses affected," he said. [BBC News]

The disaster for Australia could also be a disaster

for one of their natural treasures. Besides the immediate danger to human life, flooding also can carry land-based pollution out to sea. Just beyond Brisbane's coastal location lies part of the Great Barrier Reef, and some Australian scientists worry that all the flood waters could damage the irreplaceable natural formation.

Farms and grazing properties have been inundated, leaving some of the runoff contaminated, while environmental groups remain concerned about the pollution from various mine sites across the state. Australian Institute of Marine Science principal research scientist Katharina Fabricius said flood plumes from agricultural areas of Queensland would reduce salinity and increase nutrients and sedimentation on inshore areas. Floodwaters could damage corals, reduce species diversity and increase the abundance of seaweeds on reefs. [The Australian]

could lead to an outbreak of crown-of-thorns starfish, which has a particular taste for coral and is one of the biggest threats to the reef, she says. Meanwhile, the people of Queensland have another worry in addition to the destruction that the water itself has wrought. Mosquitoes

love water and they love warmth; with sunny, summertime Australia now flooded with water, they could become a major peril.

Professor Tony McMichael, from the Australian National University's Centre for Epidemiology and Population Health, said increasing numbers of mosquitoes breeding in the warm, wet conditions could cause fresh outbreaks of the potentially deadly dengue fever and debilitating Ross River virus in coming weeks. Murray River encephalitis, a mosquito borne disease that has a 10-20 per cent mortality rate, could also emerge. [Sydney Morning Herald]

Related Content: 80beats: In a Year Rife With “Natural” Disasters, Much of the Fault Lies With Us

DISCOVER: The Next Katrina