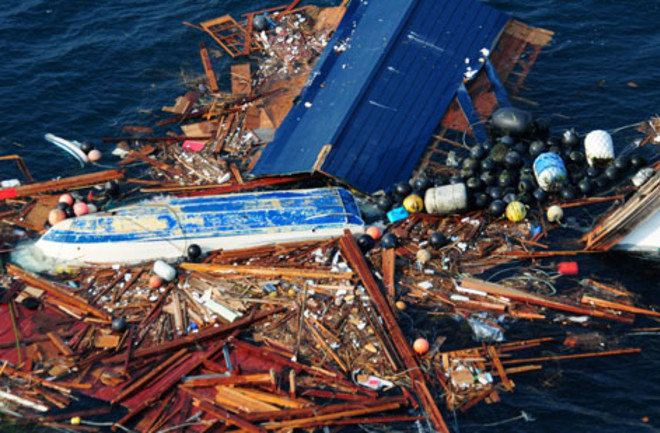 Debris fields like this one could be seen in the days after the disaster but are no longer visible. Image credit: U.S. NavyThe devastating tsunami that struck Japan in March 2011 caused a huge amount of local destruction, including damaged homes and radioactive water leaks, which has persisted to this day. But it also has affected areas far from that initial site---most prominently, by creating over a million tons of debris that are still floating across the Pacific Ocean toward North America. Scientists at the National Oceanic and Atmospheric Administration (NOAA) have been modeling the slow creep of this stuff across the ocean since 2011. Their initial computer model relied mainly on data about oceanic currents, but the latest iteration also takes into account wind speed and how wind interacts with materials differently, depending on how they float on the water. An updated NOAA report released last week shows a floating debris island field* the size of Texas that's headed toward the U.S., along with other debris dispersed throughout the ocean.

Boats and flooring and soccer balls have already made their way to the west coast of the United States. Some stuff, like a dock that washed ashore in Oregon, has brought surprising stowaways with it. So far scientists have found 165 non-native species on the dock, including the Northeastern sea star and a type of brown algae used to make miso soup. John Chapman of Oregon State University's Marine Science Center told FoxNews.com,

"We thought, 'the Pacific can’t be crossed by living organisms from Japan' … and we were wrong, very wrong."

An updated model shows the dispersion of debris in the Pacific Ocean. Image credit: NOAA

The report shows past and present distribution of the floating detritus amid concerns that the stuff could wash up on shores in Hawaii, Alaska, the U.S. West Coast, and Canada over the next few years. NOAA's recent release explains,

This new modeling effort gives us a better understanding of where the debris may have traveled to-date, but it does not predict where it will go in the future or how fast it will drift.

In addition to the debris, a wave of slightly radioactive water flushed from the Fukushima nuclear reactor should come ashore in North America sometime in 2014, but luckily it will be so diluted that it should be harmless by the time it gets here. In fact, scientists haven't found any detectable radiation in any of the debris. *Updated 11/5/13: The debris is more dispersed than a flotilla, but still concentrated in one primary area.