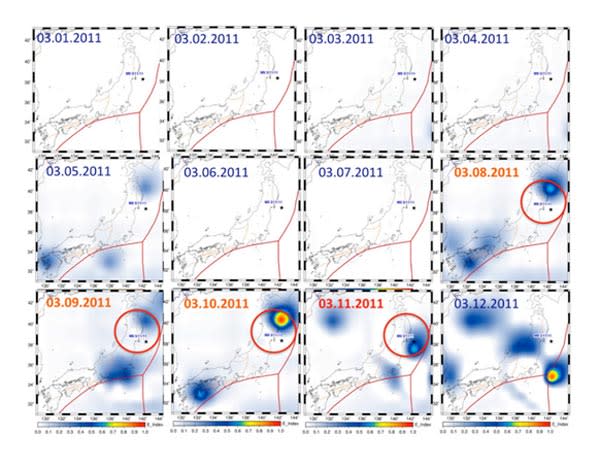 In this images of infrared radiation in the days before the March 11 earthquake, the red circle indicates the epicenter and the red lines are tectonic faults.

What’s the News: Scientists analyzing the March 11 earthquake in Japan will have the benefit of some of the most sensitive and comprehensive atmospheric data yet, thanks to satellites monitoring climate. And a team has now reported a strange effect—a sudden spike in the temperature in the atmosphere above the quake site—detected just before the event. If the spike was related to the quake, and other earthquakes do the same thing, it might help scientists predict such cataclysms in the future. How the Heck:

Not So Fast: Predicting earthquakes is fertile ground for cranks and plain-old bad hypotheses (Water running uphill! Animals acting weird!), and it’s easy to jump to conclusions with too little data. While the team hasn’t made any outlandish claims, a number of follow-up analyses are required to see whether this effect is reliably connected to quakes. This spike needs to be seen before more earthquakes, and it needs to be clear that it only happens when an event like this is imminent. If similar jumps in atmospheric ionization and heat can happen in the absence of a quake---that is, if there are lots of false positives---they’re no good as predictors. The Future Holds: The paper still needs to be peer-reviewed and published, and that process will put the team’s analysis to the test. Once it’s over that hurdle, the scientists will continue looking for signs that this effect is linked to other large quakes, collaborating with others around the world to collect the necessary data. And scientists are hoping to meet this summer in a workshop to discuss this work, one researcher told LiveScience