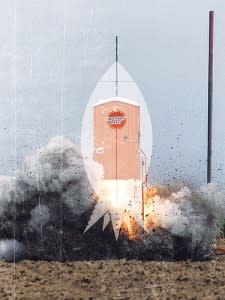 Today's sewage is tomorrow's rocket fuel--at least, according to Stanford researchers. Raw sewage has long posed a problem for scientists who aim to get rid of it. That's because the chemical byproduct of the bacteria that break down waste is nitrous oxide--a greenhouse gas also known as laughing gas. The proposed solution? Using the nitrous oxide produced by waste as rocket fuel, of course, according to Popular Science:

"[The] rocket thruster, which was designed for use in spacecraft, can consume the excess nitrous oxide to produce heat. In a Stanford press release, [researcher] Cantwell says the nitrous oxide can heat an engine to almost 3,000 degrees Fahrenheit and expel nitrogen and oxygen at 5,000 feet per second."

Hot oxygen and nitrogen are far less harmful to the environment than nitrous oxide, and the methane that also is produced can help power other wastewater plants, the researchers say. This method, in which bacteria break down the waste in the absence of oxygen, is faster and cheaper than letting sewage decompose in an oxygenated environment, in which "wastewater treatment plants pump oxygen into a roiling mix of raw sewage, to encourage good bacteria to break down organic matter." So the next time you head to the bathroom, remember that your contribution could one day prove valuable to rocket scientists. Just another reason to flush with pride. Image: flickr / ecsuecsu Related content: Discoblog: Buzz Aldrin Explains: How to Take a Whiz on the Moon Discoblog: A Novel Geoengineering Idea: Increase the Ocean’s Quotient of Whale Poop Discoblog: The Coolest Carnivorous Plant/Toilet Plant You’ll See This Week