Fighting Cow Methane at the Source: Their Food

Genetically modified grass could be the key to reducing cow emissions. 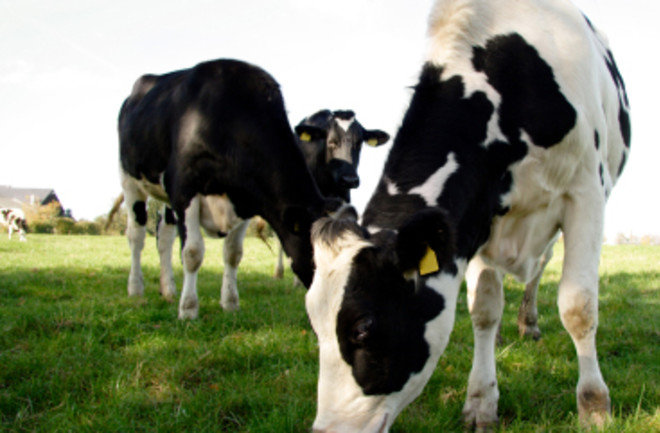 While many cattle are stuffed full of grain, grass-fed cattle have been heralded as a greener way to get beef because it diminishes the need to feed the animals antibiotics and has a smaller carbon footprint, not to mention that it yields beef with less saturated fat. Those of us lucky (or wealthy) enough to feast on grass-fed beef can rest easy knowing we have taken a step toward protecting planet Earth—or so we thought. It turns out there’s a hitch: Cow burps, which send methane into the atmosphere, may increase global warming.

Cattle are responsible for 20 percent of U.S. emissions of methane, which traps heat in the atmosphere 20 times more effectively than carbon dioxide. “Greener” grass-fed cattle are part of this methane problem too. The reason is lignin—a hard-to-digest substance in the plant cell wall. Resistant to ordinary digestion, lignin must be converted to energy with the help of microflora inhabiting a cow’s gut. As the microflora degrade the lignin, methane is released. But for those who eat grass-fed beef, there may be a solution. To take care of a cow’s gas problem, the Australian company Gramina has developed genetically modified grass that contains less lignin, making it easier—and more polite—to digest. “Genetically modified grass could be an appealing solution,” says Carnegie Mellon engineer Christopher Weber, who recently released a report on issues surrounding beef’s contribution to greenhouse gases. It could be more acceptable to the carnivores among us, he adds, “than meat grown in test tubes or giving up meat altogether.”