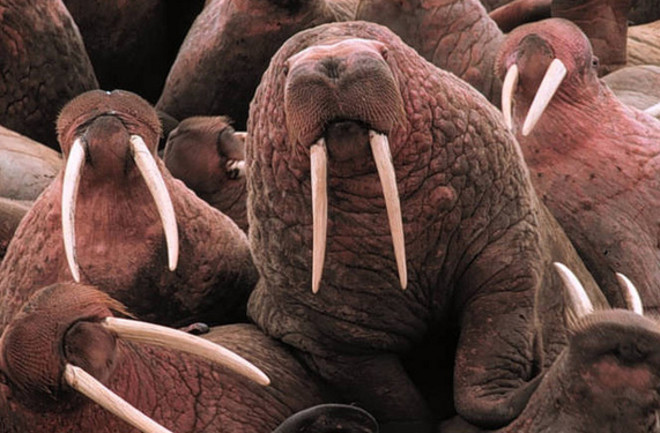 The drastic changes in the Arctic wrought by global warming aren't just threatening that icon of climate change the polar bear, they're also jeopardizing the health of other species--like the Pacific walrus. Environmentalists petitioned the federal government years ago to add the walrus to the endangered species list, but progress on the case has been slow. Now, in a decision that has angered both activists and oil drillers, the U.S. Fish and Wildlife Service has decided that even though our be-blubbered friends deserve recognition under the Endangered Species Act, there are just too many other endangered animals to take care of first. Specifically, the organization's spokesman, Bruce Woods, said that protecting walruses was advised but "precluded." That's because other animals, like polar bears and certain species of sea birds, are more imperiled in this world of receding ice. The agency also said it's hampered by lack of firm data on walrus population numbers.

"The main thing is that, compared to the polar bears, there are a lot of them," Woods said of the Pacific walrus, adding that no baseline population count for the walrus exists.... "We don't have any evidence of declines," even if declines are suspected, he said. [Reuters]

The Agency's decision has raised the ire of many.

The Center for Biological Diversity, which filed the petition that resulted in the agency decision, calls the “warranted but precluded” species status given to the walrus and many other species a “black hole.” [The New York Times]

And the big oil companies don't like this decision either because, in their perspective, any small step toward adding another Alaskan animal to the endangered species list will only create more difficulties for their plans of expanded drilling. These companies are backed by Lisa Murkowski, Alaska's Republican senator, who says that the U.S. Fish and Wildlife Service is setting a dangerous precedent by suggesting that an animal should be protected before it has enough scientific evidence to do so. Scientists do have a rough idea of current walrus populations:

Pacific walruses, which depend on floating sea ice to rest, forage for food and nurture their young, are believed to number at least 129,000 animals, according to the latest population estimate issued last year.... That figure, based on incomplete aerial surveys by U.S. and Russian scientists, dwarfs an Alaska polar bear population hovering roughly around 3,500 animals. [Reuters]

The picture painted in that last paragraph may seem rosy, but as DISCOVER has reported before, walruses are adjusting to major changes in the Arctic. Traditionally, they have summered on the ice in the Chukchi Sea, but in the past few years, that ice has retreated so much that walrus herds have crowded onto Alaskan beaches where they've never been seen before. Despite this setback in protecting Pacific walruses, there is one ray of hope: the U.S. Fish and Wildlife Service says that it will now review the state of Alaskan walrus populations every year. Related Content: DISCOVER: Will the Walrus Stand a Warmer World? DISCOVER: The Species That Put the "Danger" in "Endangered" 80beats: Arctic Report Card: Warm Weather and Melted Ice Are the New Normal 80beats: 2010′s Hot Summer Took a Toll on Arctic Ice, Walruses, and Coral 80beats: When Arctic Sea Ice Melts, Shippers Win and Walruses Lose