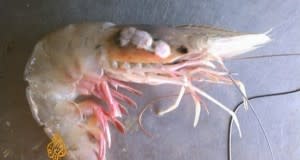 on seafood in the Gulf Coast reads like a horror story: eyeless shrimp, fish with oozing sores, clawless crabs. Unfortunately these deformities are very real and disturbingly common two years after the Deepwater Horizon oil spill

in 2010. Chemical dispersants used by BP to "clean up" the oil spill are the likely cause. Deformities happen even in ordinary circumstances, but scientists and fishers are seeing them in unprecedented scales in Gulf marine life. For example, half the shrimp caught in a Louisiana bay lacked eye sockets, according to fishers interviewed by journalist Dahr Jamail.

"Some shrimpers are catching these out in the open Gulf [of Mexico]," [commercial fisher Tracy Kuhn] added, "They are also catching them in Alabama and Mississippi. We are also finding eyeless crabs, crabs with their shells soft instead of hard, full grown crabs that are one-fifth their normal size, clawless crabs, and crabs with shells that don't have their usual spikes … they look like they've been burned off by chemicals.

Perhaps the most troubling line in the whole article is this: "Questions raised by Al Jazeera's investigation remain largely unanswered." When Jamail went knocking on doors at government and corporate offices, nobody wanted to talk. One scientist he interviews mentions the difficulty in getting funds to study the oil spill's environmental impact. The Deepwater Horizon oil spill may be rapidly fading in our memories, but its impact on the ocean is not.