Evolution of a Superstorm — Culprit in Polar Vortex Redux 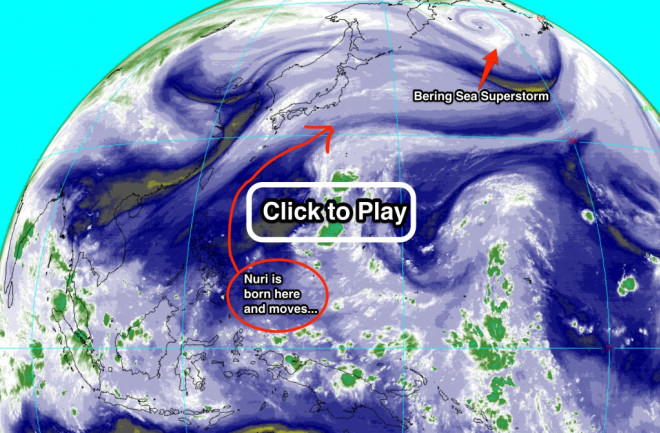 Click for an animation of infrared satellite images showing the birth and evolution of Super Typhoon Nuri. (Source: CIMSS Satellite Blog) The polar vortex has arrived with a vengeance in parts of the United States — including where I live in Colorado. If you want to see photos of its dramatic arrival here — heralded by plunging temperatures, gusty winds, and snow — along with a detailed explanation for why it has returned, see my earlier post here. But the long and short of it can be visualized in the beautiful animation above. Click the image to see it. Beware: It's a really big file, so it could take longer than usual to load. But trust me: It'll be worth the wait. The animation consists of infrared satellite images that visualize water vapor in the atmosphere. It shows the birth of a tropical storm in the Pacific Ocean on Oct. 31, 2014, it's evolution into Super Typhoon Nuri as it sweeps up toward Japan (but luckily misses it), and its transition into one of the most powerful extratropical storms on record in the Bering Sea — and quite probably the strongest. Nuri's spawn, the Bering Sea superstorm, has kicked the jet stream over North America into an exaggerated wavy pattern. This allowed unusual warmth to build along the West Coast over the weekend, and a chunk of the polar vortex to plunge south over the northern plains and farther south. Right now, in fact.