The Dallol pools are likely so hot, salty and acidic that even extremophile microbes are unable to enter. 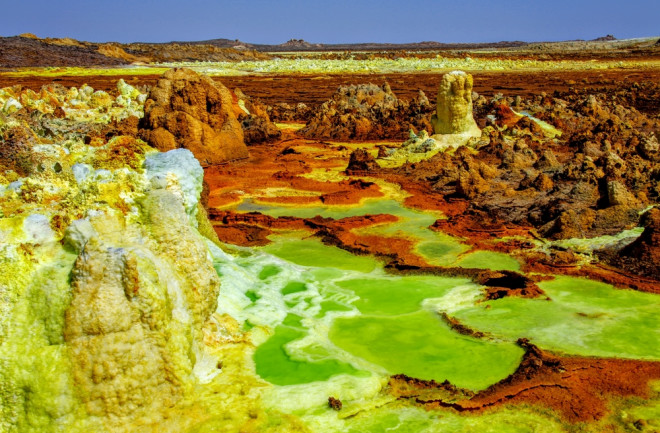 In the salt pools of Dallol, in northern Ethiopia, life faces some of the most extreme barriers to survival anywhere on Earth. Not only are the colorful ponds hot and highly acidic, but they are located above a massive dome of salt, pushing salinity levels to 10 times those of the ocean or higher.

The combination of factors means that even extremophiles, bacteria adapted to harsh conditions, have trouble surviving. And new research hints that there are some places within Dallol where life simply cannot survive. Temperatures reaching above 200 degrees Fahrenheit, pH levels that dip below zero and hypersaline water create an almost unearthly trifecta that stymie even the hardiest microbes.

A team of researchers from France and Spain took samples from the ponds and surrounding areas over the course of two years and applied a battery of tests to look for signs of life. While some areas at Dallol saw a diversity of extremophile microbes, there were a few places where signs of life were entirely absent, they write in Nature Ecology & Evolution. Previous studies that indicated some microbes might live in these ponds were likely contaminated by bacteria on either the instruments or the scientists themselves, they say, or which blew in on the wind from elsewhere.

Despite their hostile conditions, the ponds themselves are an impressionistic tableau of greens, yellows, reds and blues, which change constantly as new materials bubble upwards. Unlike the pools of Yellowstone, though, whose colors come from microbes, the Dallol ponds are tinted by the presence of various kinds of iron. The colors can change by the day as materials circulate, creating an ever-changing iridescent landscape — beautiful but deadly.

The Dallol ponds sit far below sea level in an area known as the Afar depression. It’s a rift created as continental plates slowly tear the African continent apart. The area is almost 400 feet below sea level, and rife with volcanic activity. That hydrothermal dynamism is what forces mineral-rich water into the pools, where the iron gradually mixes with oxygen to produce a stunning spectrum of colors.

At the rift's bottom, the pools ripple atop a salt dome created by the evaporation of ancient seawater — and which was buried and then ballooned upwards over time. In this satellite image, the main pools can be seen in yellow at the center.

The water seeping through fissures in the rock is forced through the salt layer, making it intensely briny. Salt concentrations in the water can be between 35 and 70 percent, too much for all but the most salt-loving, or halophilic, microorganisms to stomach.

The waters of the pools can be highly acidic. In some places, the pH can dip below zero, making them stronger than battery acid. Even in places where the pH is higher, it can still hover around levels that make it hard to for most bacteria to grow. Combined with the scorching heat and salinity, the Dallol pools are a rarified environment indeed.

Another barrier to life comes in the form of a compound that tears apart the building blocks of life at a molecular level. Chaotropic molecules disrupt the hydrogen bonds between water molecules that help them bind together. The result is that the proteins and nucleic acids that make up biological organisms cannot form. Chaotropic molecules in the Dallol ponds exist at high enough concentrations that cells might not be able to survive.

The pools are located in one of the hottest places on Earth, where average daily temperatures are around 95 degrees Fahrenheit. Tourists nevertheless make the trek to the pools, drawn by their unique appearance and rarity.

The forbidding environment of the pools has made it a popular location for astrobiologists. These scientists study the kinds of conditions that microbes on other planets might face. Understanding the limits of what life on Earth can survive gives them an idea where it might be found elsewhere. Such research has indicated that places like Saturn’s moon Titan and Mars might be good places for alien life.

But even life has its limits. While previous studies had found evidence of microbes living in the Dallol pools, the latest research indicates that was due to contamination by bacteria from outside of the pools. The researchers looked for signs of life in multiple ways: scanning for DNA, trying to grow cultured samples in the lab and searching with scanning electron microscopes for living cells. After excluding likely contaminants, they found at least three areas where nothing grew: pools on the Dallol salt dome and in the Black and Yellow lakes nearby.

But the region as a whole isn’t lifeless. Other, less extreme pools have an abundance of salt-loving, extremophile microbes. The creatures represent a wide diversity of species, the researchers say, indicating that very salty environments might not be as hostile to life as previously thought.