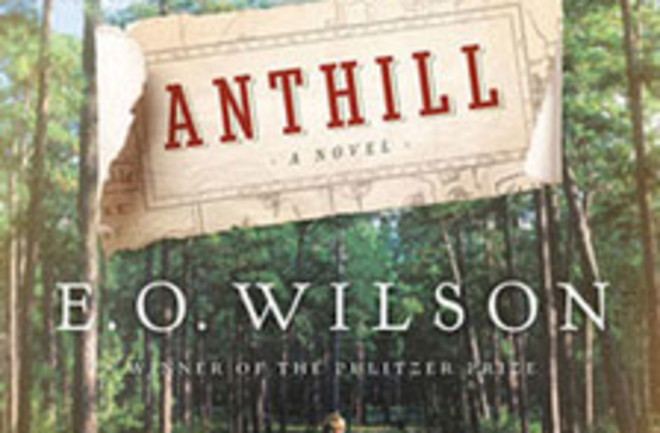 Many children have a "bug period"--a time of life when bugs and creepy crawlies are a source of endless fascination and learning. Naturalist Edward O. Wilson jokes that unlike other kids, he never grew out of his bug period. Luckily for this biologist, his lifelong passion for ants has yielded a career rich in accomplishment and accolades. He is not just the world's preeminent expert on the social behavior of ants, but also the recipient of the National Medal of Science and two Pulitzer Prizes for nonfiction. Now, at the age of 80, Wilson has taken a stab at fiction. His first novel, Anthill, combines two of his greatest loves--his childhood home, Alabama, and the ants that have been his lifelong friends. Described as an "six-legged Iliad," Wilson's Anthill draws parallels between human and ant societies.

Though there are no ant symphony orchestras, secret police, or schools of philosophy, both ants and men conduct wars, divide into specialized castes of workers, build cities, maintain infant nurseries and cemeteries, take slaves, practice agriculture, and indulge in occasional cannibalism, though ant societies are more energetic, altruistic, and efficient than human ones [The New York Review of Books].

The book's first and third sections deal with the adventures of an Alabama boy named Raphael Semmes Cody, called Raff. The boy grows up poking around the lush pine savanna of the Nokobee Tract; he's drawn to its natural wonders, and uses the forest to escape from his parents' toxic marriage. In this pristine woodland he literally leaves no stone unturned as he discovers the forest's rich flora and fauna. Raff grows up and heads to Harvard to study law, returning later in life to protect the Nokobee from feckless developers. But fans of Wilson's science will be most interested in the book's middle section, where the author inserts a mini-novella describing the trials and tribulations of the ants living in the endangered forest. In this second section, "The Anthill Chronicles," the reader embarks on an epic entomological journey that's told from the ants' point of view. In an ant colony called Trailhead, the worker ants realize that their queen dead. She has been dead for several days, but the ants don't realize it until they smell the death chemicals; this is one of the many ways Wilson shows how pheromones drive behavior and life in the colony. Without a queen at its head, the colony faces its next trial--an attack from the neighboring colony of Streamside. Luckily for the Trailhead colony, nature steps in, producing a genetic mutation that results in the birth of many queens or queenlets. Without giving much of the plot away, suffice to say that what ensues is Wilson's depiction of how balance is restored to the natural order. Reviews of the book have been mixed. Writing for the The New York Review of Books, Margaret Atwood praised Wilson for his first novel, saying that his love for his subject shows in the exuberance of the prose, and in the inventiveness of the plot. And—with the exception of small stretches of awkwardness and preachiness—the reader will have a great time reading it [The New York Review of Books]. The Washington Post stomped on the book, calling it clumsy, heavy on exposition, and full of digressions. However, that reviewer suggested that Wilson might have produced a masterpiece had he just stuck to writing about the ants, and declared that in "The Anthill Chronicles" section

almost everything we learn of the ants' enemies and friends, their memories and emotions and ways of communicating, their divisions of labor mirroring our own, is oddly engaging, even riveting [Washington Post].