A comparison of tropical Pacific sea surface temperature anomalies shows moderate El Niño conditions in 2010 versus what things look like now. (Images: National Climatic Data Center. Animation: Tom Yulsman) Last month, conditions in the tropical Pacific were looking increasingly El Niñoish. But right now, a better term for what's happening might be "El Limbo." The odds of a full-blown El Niño occurring are now just 50 to 60 percent, down from 65 percent last month, according to the monthly report from the U.S. Climate Prediction Center, released this morning. What's more, if El Niño does finally emerge in the next few weeks, in all likelihood it won't last long. Neutral conditions are most likely by March, according to the CPC. 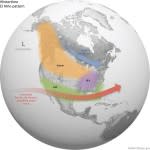 Why should we care? Click on the thumbnail at right for a visual answer to that question. The map shows what kind of weather impacts El Niño typically brings to North America. And did you see it — that streak of green indicating wet conditions across the southern tier of the United States? The bottom line: If you eat fruits and vegetables you should care about what's happening in the tropical Pacific because a full-blown El Niño would raise the odds of relief from the brutal drought that has gripped California — the nation's fruit and vegetable basket. Should California's drought continue, crop failures could lead to tightening supplies and rising prices. So, what happened in the tropical Pacific that led the Climate Prediction Center to let Californians down (and all of us, really) with its lowering of the El Niño odds? Bob Henson offers an excellent explanation in a blog post at Weather Underground. Here's the gist of it, from his post:

Although the tropical Pacific waters behaved as if a major El Niño was on tap, it seems the atmosphere didn't get the message. Throughout 2014, the atmospheric component of El Niño failed to emerge consistently even as oceanic conditions appeared favorable.

To my eye, even the tropical Pacific waters aren't looking so El Niñoish right now. You can check it out in the animation at the top of this post. It shows what a bona fide El Niño looks like compared to El Limbo. Look closely at the area I've circled east of the International dateline and west of South America. The first frame in the animation shows how sea surface temperatures in the tropical Pacific Ocean departed from the long term average during the week of Dec. 16, 2009. A moderate El Niño was underway at that time. What do you see? Relatively warm sea surface temperatures in that region — typical of El Niño. The second frame shows sea surface temperature anomalies for the week of Jan. 1, 2015. Where has all the sea surface heat gone? Into limbo, I'm guessing... Lastly, I really want to give credit where credit is due: I did not come up with the "El Limbo" idea. I saw it first on this post about El Niño by Elisabeth Gawthrop. Nice!