Einstein's Green Refrigerator May Be Poised for a Comeback 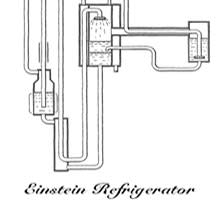 Many years after he revolutionized the field of physics, Albert Einstein took up a new task: inventing a better refrigerator. The 1930 appliance that he patented in partnership with a former student, Leo Szilard, had no moving parts and required no electricity, but was quickly forgotten as more efficient refrigeration technology was invented. Now, an electrical engineer has built a prototype of the forgotten Einstein fridge as part of a

three-year project to develop more robust appliances that can be used in places without electricity [The Guardian].

Einstein and Szilard were reportedly spurred to inventive action by a news report of a Berlin family that died when toxic gas leaked from their refrigerator; the two physicists decided to create a system without moving parts to reduce the likelihood of accidents. Their invention uses ammonia, butane, and water, and lowers the air pressure within the mechanism to make the butane boil at a lower temperature.

At one side is the evaporator, a flask that contains butane. “If you introduce a new vapor above the butane, the liquid boiling temperature decreases and, as it boils off, it takes energy from the surroundings to do so,’ says [engineer Malcolm] McCulloch. ‘That’s what makes it cold” [Clean Technica].

The mix of gaseous butane and ammonia then pass though a water-filled condenser, where the ammonia dissolves into the water and the butane is freed, and soon the gases are ready to begin the cycle again. The fridge just requires a heat source to heat the liquid, and McCulloch is experimenting with using solar energy for that step. Einstein's fridge could make a comeback because its system doesn't rely on the greenhouse gases that are linked to global warming.

Modern fridges are notoriously damaging to the environment. They work by compressing and expanding man-made greenhouse gases called freons - far more damaging that carbon dioxide.... Doug Parr, chief scientist at Greenpeace UK, said creating greener fridges was hugely important. "If you look at developing countries, if they're aspiring to the lifestyles that we lead, they're going to require more cooling - whether that's air conditioning, food cooling or freezing. Putting in place the technologies that are both low greenhouse-gas refrigerants and low energy use is critical" [The Guardian].

If conventional fridges are disposed of improperly, the greenhouse gases can escape into the atmosphere. For another bold proposal for how to keep your milk cold, check out the DISCOVER article, "The Magnet Refrigerator." Image: Wikimedia Commons