The carbon impacts from increased space launches could threaten the ozone layer once again. 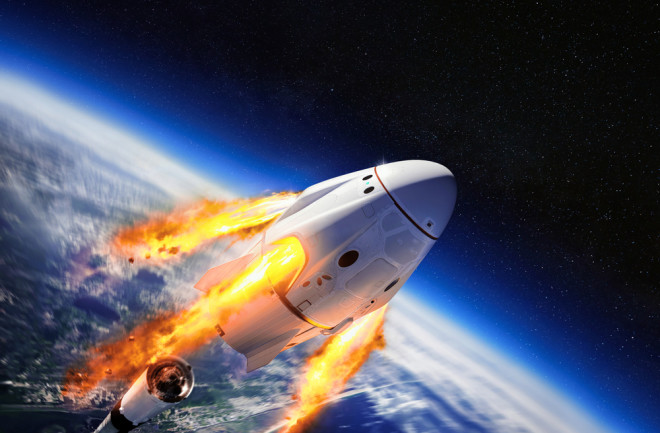 When Elon Musk founded SpaceX in 2002, he envisioned a greenhouse on Mars, not unlike the one later depicted in the 2015 blockbuster The Martian. Soon, his fantasy grew from a small-scale botanical experiment into a vision for a self-sustaining Martian city. In a speech at the 67th International Astronautical Congress in 2016, he argued his point. “History is going to bifurcate along two directions. One path is we stay on earth forever and then there will be some eventual extinction event,” Musk says. “The alternative is to become a space faring civilization and a multi-planet species, which, I hope you would agree, is the right way to go.”

Though Musk later clarified that the extinction event he referenced may take place millennia (or even eons) in the future, the conditions on earth today are becoming increasingly dangerous for human beings. Deadly heat waves, food insecurity and catastrophic natural disasters are a few of the hazards that we face as the planet continues to warm. Unfortunately, the Red Planet is a very long way from becoming a viable alternative home. While we measure carbon dioxide concentrations in parts per million on earth, Mars’ atmosphere contains 96% CO2, just one of a litany of logistical nightmares that Martian colonists would have to overcome.

In a perfect world, Musks’ dreams of extraterrestrial civilization could coexist with the eco-forward values that have driven ventures like Tesla’s solar program. But while SpaceX’s aspirations are in space, its operations have an undeniable impact at home. Unlike a Tesla sports car, SpaceX’s rockets aren’t propelled by electricity — they burn liquid methane and oxygen.

Carbon emissions from space launches are dwarfed by other sources of greenhouse gasses, but they could have an outsized impact on climate. The reason for this stems from one particular product of rocket propulsion: black carbon. These tiny chunks of crystalline carbon atoms are short-lived in the atmosphere, but highly absorptive of sunlight. On the Earth’s surface, black carbon from diesel, coal and wood combustion poses a threat to environmental and public health, particularly in developing countries. But in the upper atmosphere, rocket engines are the sole source of black carbon. For years, scientists have warned that these emissions could have unpredictable effects on climate. Still, research on the topic has been frustratingly slow.

“We identified the issue with black carbon in 2010,” says Darin Toohey, an atmospheric scientist at the University of Colorado Boulder. “The story comes and goes, but the basic players remain the same.”

In 1985, a group of atmospheric researchers led by Pawan Bhartia presented a terrifying satellite image to a room-full of scientists, policymakers and journalists at a conference in Prague: There was a gaping hole in the ozone layer of the stratosphere directly above Antarctica. The culprits were a group of chemicals used by refrigerator manufacturers called chlorofluorocarbons, or CFCs. Just two years later, the Montreal Protocol was signed by 46 countries; over the next decade, CFCs were phased out by industry around the globe. Today, ozone levels are slowly rebounding.

But space travel could endanger the ozone layer once again. Black carbon is an excellent greenhouse gas — excellent in the sense that it is very good at absorbing sunlight and converting it into heat. When rockets travel through the upper atmosphere, they raise temperatures in their wake. At the moment, there are too few space launches for this effect to be very pronounced. But Toohey warns that consistent launches, like the ones required to populate a Martian city, could pose a problem.

“The effect is to cause a slight temperature gradient between where the black carbon is warming things and other parts of the planet that aren’t launching rockets,” he says. “You end up with a change in the winds in the stratosphere and mesosphere, which may not sound like much, but those winds move ozone from one part of the planet to another.

In a research project that is now more than a decade old, Toohey and his colleagues modeled the atmospheric outcome of a scenario where 1,000 rockets were launched every year. What they found was striking: Stratospheric ozone levels were expected to shift by 1 percent in tropical regions and as much as 6 percent at the poles. “You're not creating an ozone hole, but you're basically just changing things by the same amount,” Toohey says. “Those are the same numbers that triggered the whole Montreal protocol.”

In a landmark 1995 paper, dermatologist Frank De Gruijl estimated that even a 1 percent change in stratospheric ozone could increase the prevalence of skin cancer by 2 percent. As is the case with many environmental issues, the public health cost of emissions poses an ethical dilemma for those who are tempted by the prospect of space colonization. “Whose life is more important?” asks Toohey. “A billionaire astronaut or someone in Bangladesh?”

Ultimately, skin cancer may just be one of many issues that arise from increased space launches. Many other rocket compounds that are emitted from rockets have yet to be studied. Even shifting ozone concentrations could have effects beyond the obvious. Though they have yet to propose a cause, Toohey and his colleague’s model also showed a significant change in the amount of seasonal sea ice in the Arctic and Antarctic.

“What matters to me is not whether the sea ice increased or decreased,” Toohey says. “It’s that such a small change in atmospheric ozone has that big of an effect.”

Though research into the global effects of space travel is still extremely limited, there is enough to know that we don’t know much yet. While research into space travel itself may be more attractive to terraforming enthusiasts like Musk, it must be accompanied by knowledge of its impacts.