Edifying View of Volcanoes and Cloud Patterns from Space 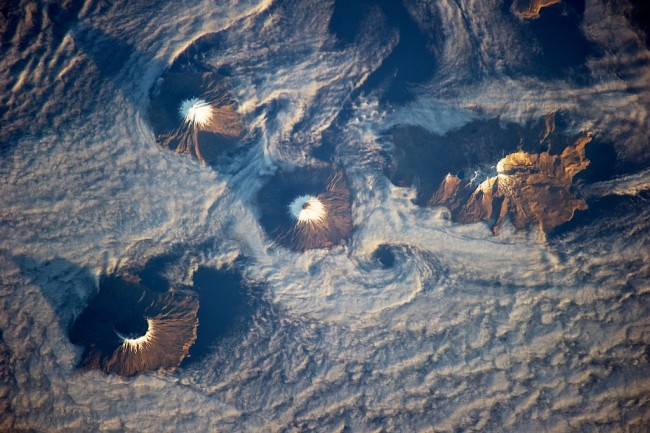 The Islands of the Four Mountains in Alaska's Aleutian chain are seen in this photograph taken from the International Space Station (ISS). The islands are the upper slopes of volcanoes that rise from the sea floor. (Source: NASA Earth Observatory) It was the lovely morning light that first drew me to this image of four volcanic islands in the Aleutian chain, photographed in November by an astronaut aboard the International Space Station. The magic hour light was, in fact, what NASA's Earth Observatory emphasized when it published the photo yesterday. But then I noticed what was going on in the cloud deck — and for me, at least, that elevated the image from the extraordinary to the sublime. 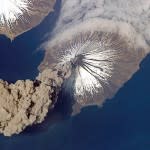 Cleveland Volcano erupting on May 23, 2006, as seen from the space station. Click to enlarge. (Source: NASA) The most obvious feature is something that looks like the eye of hurricane. It's to the lower right of snow-capped Cleveland volcano in the center of the image. This is not a hurricane, of course. Instead, it's an atmospheric vortex downwind of the island. Two smaller ones are also visible. Vortices like these are not uncommon when wind blows across an island, forming spiral eddies in the atmosphere that can be reflected in cloud patterns. They're known as von Karman vortices, named after the NASA scientist, Theodore von Karman, who first described them in the atmosphere. (I've written about them before. See this post, for example.) Cleveland volcano rises 5,675 feet (1,730 meters) above the sea. To its lower left in the image at the top of this post is Herbert, distinguished by its volcanic caldera. Tana is to the right, and Carlisle to the upper left. This image also caught my eye because I've actually seen Aleutian Island volcanoes from the air. On my way from the United States to Tokyo last May I shot this photograph of two of them: 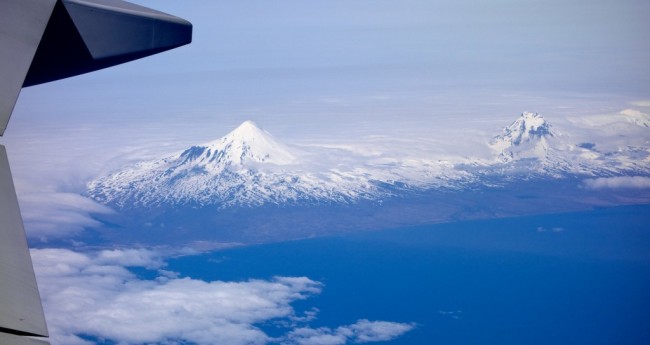 Two Aleutian volcanoes are visible in this photograph taken from a commercial airliner flying from San Francisco to Tokyo in May, 2013. (Photograph: © Tom Yulsman) Closest to the wing is Shishaldin Volcano, which towers 9,373 feet above the sea on Unimak Island. This is the highest peak in the Aleutian Islands. Click on it for a larger version and then look closely at the summit. You should be able to make out a stream of steam. (To its right is the more jagged Isanotski.) 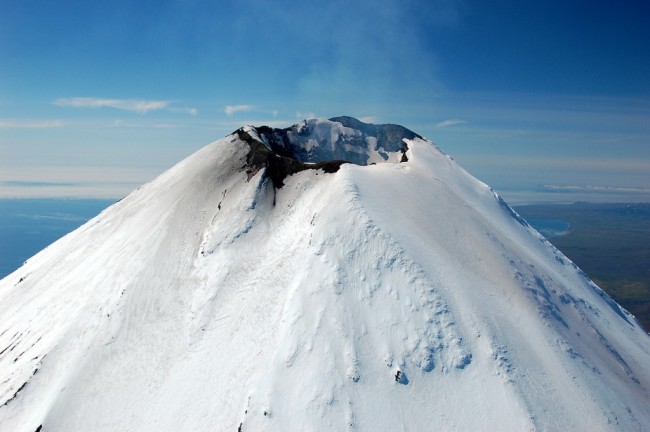 The summit of Shishaldin Volcano in Alaska's Aleutian Islands. (Photograph: Courtesy Cyrus Read, Alaska Volcano Observatory / U.S. Geological Survey) Next up is a closeup of Shishaldin's summit, photographed in 2008 by Cyrus Read of the U.S. Geological Survey. The Aleutians consist of an arc of volcanic islands that stretches 1,550 miles (2,500 kilometers) from western Alaska to the Kamchatka Peninsula in Russia. They've formed as the Pacific tectonic plate has plunged into the mantle under the North American plate. The heat at depth causes these crustal rocks to melt. Some of this material rises and melts its way through the crust, forming volcanoes at the surface. If you're interested, you can find diagrams, maps and a more detailed description of the geology here.