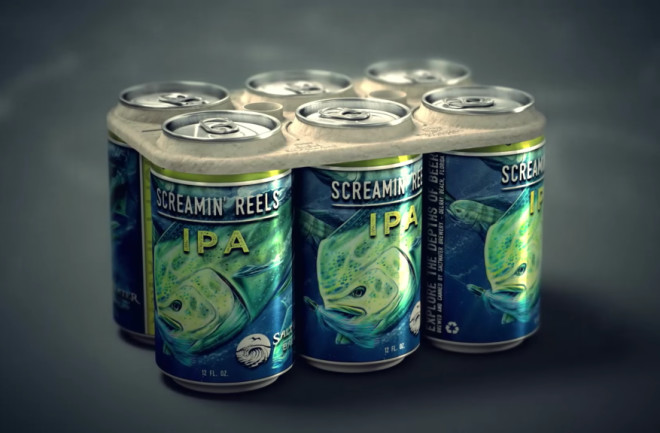 (Credit: Saltwater Brewery) Plastic six-pack rings are the bane of conservationists — images of sea birds and turtles entangled in them serve as constant reminders that consumer culture and the environment don't get along. But thanks to an innovation from a Florida-based brewery, we can feel a little better about enjoying a six-pack. Saltwater Brewery has partnered with the ad agency We Believers to create what they say is the first fully edible beer can packaging. Made from byproducts of the brewing process such as wheat and barley, their six-pack holders are fully biodegradable and completely digestible. Rather than ensnaring curious animals in a corset of litter, the company's six-pack rings could serve as a satisfying snack. And if nothing is biting, the rings quickly decompose. Plus, the drink holders are just as strong as the plastic variety, which should keep those Screamin' Reels safe, as well.

The company 3-D printed a test batch of 500 holders in April, according to AdvertisingAge, and it plans to scale up production to meet its current output of 400,000 cans of beer a month. While the edible holders are more expensive to make, Saltwater Brewery wants set an example for other beer producers and encourage them to adopt the idea. They say if their edible holders become commonplace, they could potentially be as cheap as the regular plastic rings. [embed]https://www.youtube.com/watch?v=-YG9gUJMGyw[/embed]

Other designs for six-pack holders have emerged in recent years, such as the top-hugging holder made by PakTech, and favored by craft breweries for its unique look. Although the design uses more plastic, the company says that it won't harm wildlife in the same way, and reduces the amount of other packaging materials. Plastic is still, well, plastic though, and it is difficult to completely eradicate the impact our disposable packaging has. The six-pack ring crisis is not as dire as it was in the 1970s, when images of trapped wildlife first began to appear. Six-pack rings are now widely made from photo-degradable plastic, meaning that they dissolve in sunlight and should eventually fall apart. However, the current standards specify that the rings should be made to break down within 90 days, leaving plenty of time to harm wildlife. And, they don't completely disappear, at least not for a long time, so they could still pose a risk to animals that eat them. Moving away from plastic entirely and embracing sustainable solutions could be a much better idea. It's not just drink holders that threaten wildlife however. Plastic of every size and description floats in the oceans, according to the Ocean Conservancy's 2015 report. The organization's investigation found plastic inside many species of marine animals, and that these plastics often absorb and hold on to dangerous chemicals. Six-pack rings make up only a small percentage of the plastic we toss, but the idea is heartening nonetheless.