Eco-Groups Try to Stop Tanzania's Highway Through the Serengeti 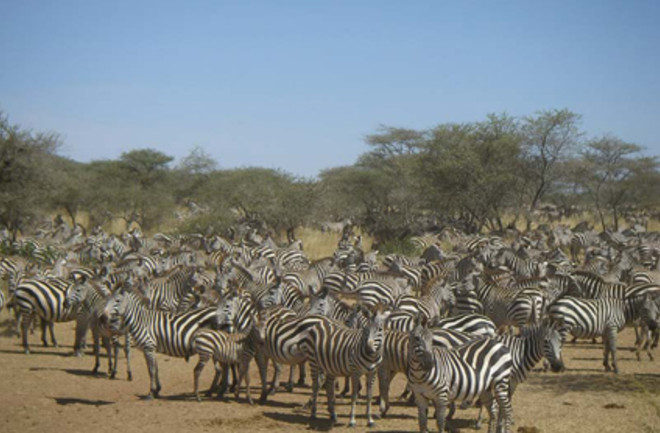 Government and big business try to build a massive industrial project in a protected space. Wildlife defenders rise up to save the threatened reserve. This starkly drawn plot line sounds like the simplistic basis of a hundred Disney films, but in this case the drama is playing out for real in Tanzania. The government of Tanzania would like to build a highway that connects the commercial activity on the country's coastal eastern side to the inland and more remote west. That highway, however, would cut right through the plains of Serengeti National Park, and right through the annual migratory path of the millions of gazelles, zebras, and wildebeests that head from Tanzania to Kenya and provide a gorgeous visual staple for nature films. Groups like the Wildlife Conservation Society (WCS) and Zoological Society of London have raised their voices to oppose the project.

James Deutsch, executive director of WCS's Africa programme said: "The Serengeti is the site of one of the last great ungulate migrations left on Earth, the pre-eminent symbol of wild nature for millions of visitors and TV viewers, and a hugely important source of income through eco-tourism. To threaten this natural marvel with a road would be a tragedy." [Press Association]

each year to behold the great migration

. Nevertheless, tourism isn't Tanzania's sole industry, and so the country has tried to tinker with the Serengeti before.

In the early 1960s, the Tanzanian government tried to stop one of the greatest animal migrations on the planet.... At the time, officials erected miles of wire fence to try to steer the animals in another direction. They promptly trampled the fence flat. [TIME]

Just how likely the new road project is to go through remains unclear for now.

A spokesman for Tanzania National Parks, Pascal Shelutete, said the road won't be built until feasibility studies have been done. "All the precautions will be taken care of. The government is aware of the importance of this portion of the road," Shelutete said. "The project won't take off until all the kinds of studies are carried out to see what will be the positive and negative impact of it." But Tanzanian media have previously quoted officials as saying such feasibility studies have already been completed and that the road project is on track. [AP]

The groups opposing the project say the highway could just as easily run a route that's much further south and wouldn't disrupt the great migration. But the outcome may depend upon whether Tanzanians, and not foreign eco-groups, make noise about the project. Related Content: DISCOVER: To Save a Watering Hole

The Loom: Hyena Blogging, Live from the Serengeti