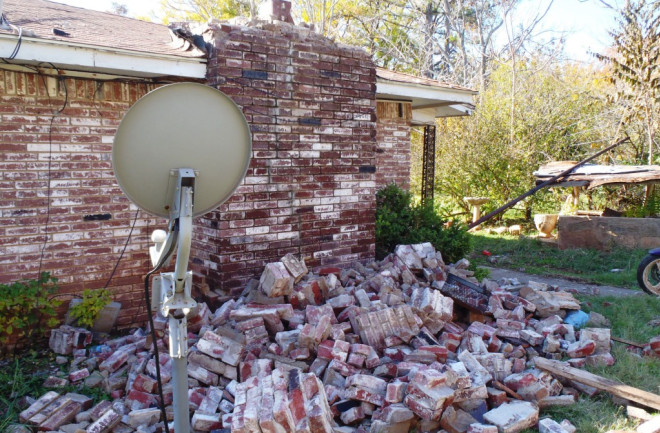 An Oklahoma home damaged in 2011 during an earthquake that was likely spawned by injecting wastewater during fossil fuel extraction. (Credit: USGS)

Earthquakes used to be uncommon in Middle America. But in the last decade, quakes numbers have skyrocketed in Oklahoma and Kansas. The major uptick in seismic activity has risen alongside the growth of oil and gas production in the area. When fossil fuel companies dispose of wastewater by injecting it into underground wells, the increased pressure deep in the earth can trigger tremblors.

Now, in a new study, researchers say that not only have earthquakes in Oklahoma grown more frequent, they have also gotten deeper, as oilfield wastewater sinks and creates high pressure environments deep underground where earthquakes start. The research suggests wastewater may continue to sink and increase pressure that can trigger earthquakes for another 10 years even after oil and gas companies eventually stop injecting wastewater into underground wells.

“Our study implies that simply turning off the injection wells will not immediately stop the earthquakes,” said Virginia Polytechnic Institute hydrogeologist Ryan Pollyea, who led the new research.

While attending a workshop in Oklahoma last February, Pollyea molded an idea. “It was super cold outside, and I began thinking about how the weather affects wastewater injection operations,” he said. Pollyea grew up in Southern California where the 1994 Northridge earthquake and persistent droughts shaped his youth. His mom also worked in water conservation for the city of Los Angeles, so pondering the relationship between water and earthquakes was second nature to him.

“It occurred to me that any wastewater stored above ground was probably getting cold,” he said. When it’s cold, a fluid’s density increases and as density rises, fluid pressure builds up. This led Pollyea to the idea that water density might play a role in the seismic activity associated with wastewater injections. If the wastewater is denser than the fluid already sitting in deep geologic formations, then injecting high-density wastewater into underground wells could create enough pressure to set off quakes. And, as it turns out, the oilfield wastewater in Oklahoma and Kansas is denser than the fluid in the subterranean geologic formations.

Pollyea was curious to know how this difference in density would affect the underground pressure. To find out, he and his team built a model that reproduces the physics of the system.

USGS maps forecast earthquake damage in Kansas and Oklahoma in 2016 and 2017. (Credit: USGS)

The model revealed that high-density wastewater sinks and displaces the lower density fluids in the deep rock formations, Pollyea and team report Tuesday in the journal Nature Communications. “When this happens, the fluid pressure increases and this can trigger earthquakes,” Pollyea said.

In the Raton Basin of northern New Mexico and southern Colorado, the researchers found the opposite was true. In the Southwest, wastewater is not denser than fluids in the deep rock formation so the wastewater doesn’t sink and earthquakes there are not getting deeper, the team reports. But in Oklahoma, quakes become systematically deeper soon after fossil fuel companies inject this high-density wastewater. The finding implies a surprising long-term consequence of wastewater disposal in the area.

“Our models show that fluid pressure caused by high-density wastewater disposal can persist in the environment over time scales exceeding 10 to 15 years,” he said.

Although other research shows reducing injection rates can decrease earthquake activity, the new study suggests the simple fix of turning off injection wells will not stop the quakes right away, Pollyea said.