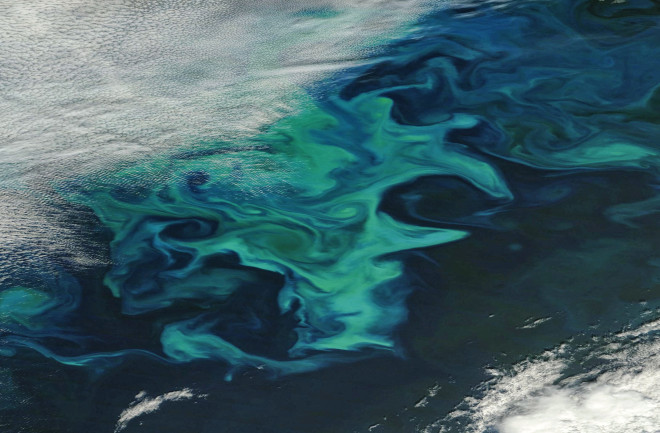 The Moderate Resolution Imaging Spectroradiometer (MODIS) on NASA’s Terra satellite acquired this image of a large phytoplankton bloom just south of Iceland on June 3, 2016. (Source: NASA Worldview. Note: This version is enhanced a little to bring out details in the swirling eddies. See below for specifics.) Billions of tiny plant-like organisms have painted the seas in a swirling pattern reminiscent of Vincent Van Gogh's famous painting, The Starry Night. It's part of an annual event — a bloom of phytoplankton that spreads north in the Atlantic Ocean, peaking in late spring. On June 3, the clouds parted just enough south of Iceland to reveal part of this year's bloom to NASA's Terra satellite. Using photosynthesis to capture solar energy, phytoplankton form the basis of marine food webs. In the North Atlantic, they are so prolific that they help make Icelandic waters among the most productive fisheries in the world. The beautiful coloration in the bloom spotted by the Terra satellite comes from the chlorophyll that enables phytoplankton to capture solar energy and, through photosynthesis, turn it into chemical energy. The varying tones of blue and green are the result of different kinds of phytoplankton:

Source: NASA Worldview Click on the thumbnail at right to see that original. I find it to be just a little muddy. So I decided to work on it a bit in Adobe Lightroom using a plugin called the Nik Collection. I worked on the amount of contrast in the image's highlights, midtones and shadows to bring out the textures and details of the bloom. The result is the enhanced image at the top of this post. I think the enhancements help us see more clearly the swirling eddies that form as different surface currents clash. So yes, I did take a little license with the image. But only to better showcase the work of the true artists.