Earth Is Off to a Relatively Cool Start in 2021

Emphasis on the word 'relatively': Globally, last month was still among the 10 warmest Januaries on record 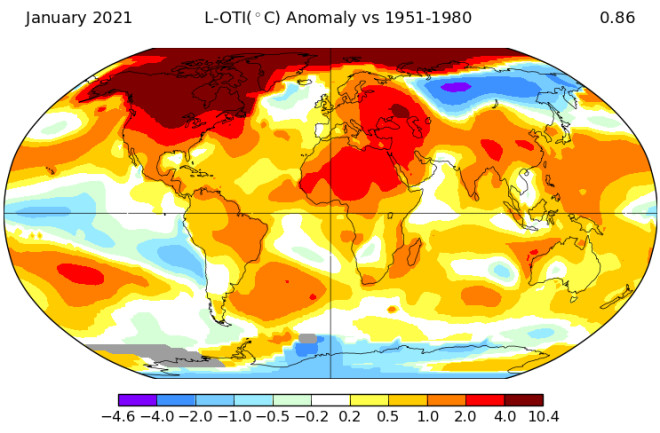 Here's how temperatures around the globe varied from the long-term mean in January of 2021. According to NASA's estimate, the month was the sixth warmest January in records dating back to 1880. (Credit: NASA Goddard Institute for Space Studies)

If you happen to live east of the Continental Divide in the Lower 48 States, or anywhere south of the Yukon and Northwest Territories, I probably don't need to tell you this:

Baby, it's REALLY cold outside!

With various factors conspiring to pump frigid Arctic air across most of North America, news published today by NASA and NOAA may not seem surprising: The planet is off to a relatively chilly start in 2021.

Just a month after scientists reported that 2020 either tied for warmest year on record, or was second warmest, the new analyses found that the month of January didn't come close to setting a record. By NOAA's reckoning, it was the seventh warmest January on record. By NASA's it was sixth warmest (with the European Copernicus Climate Change Service concurring).

The discrepancy between NASA's and NOAA's analyses is largely due to a difference in how the two U.S. agencies handle a relative lack of fixed monitoring stations in the Arctic. NASA makes up for it by extrapolating temperatures there. NOAA does not fill in the monitoring gaps in this way, so it's analyses often produce slightly cooler conclusions.

No matter. Sixth versus seventh warmest is a discrepancy without much meaning. That's because over the long term, global warming continues to be relentless. In fact, January 2021 marked "the 45th consecutive January and the 433rd consecutive month with temperatures, at least nominally, above the 20th-century average," according to NOAA.

A time series of global surface temperature anomalies in January, with the black line indicating the overall trend, and the green line being a smoothed time series. (Source: NOAA)

If you're skeptical of that word "relentless," check out the graph above. Although there have been some ups and downs, the global warming trend over the long term could not be clearer. (That's also evident in a similar time series based on NASA's independent analyses.)

During this past January, an ongoing La Niña episode helped tamp down global temperatures.

That cooling effect is evident in this map showing how sea surface temperatures varied from the long term average in the Pacific Ocean. See that spear of cooler than normal temperatures arrowing west across the tropical Pacific? That is La Niña's signature.

"La Niña is still here, but forecasters estimate about a 60% chance that neutral conditions will return this spring," writes Emily Becker, a University of Miami climatologist and one of the authors of the always awesome ENSO blog. "By the fall, the chance that La Niña will return is approximately equal to the chance that it will not."

If La Niña does indeed wave bye bye, we definitely should not expect the globe to warm up enough for 2021 to finish up as the warmest year on record. Given the relatively cool start to the year, NOAA pegs the odds of that happening at just 2.9 percent. And there's a one-in-four chance of 2021 coming in as one of the five warmest.

But here's something you can definitely count on: "Based on current anomalies and historical global annual temperature readings, it appears that it is virtually certain that 2021 will be a top 10 year," according to NOAA. The agency says there's a greater than 99 percent chance of that happening.

Meanwhile, for much of North America right now, the operative descriptor is BRRRRRRR!!!

This is a stark reversal from January. While the globe overall didn't come close to setting a temperature recoerd, North America did. As NOAA puts it, "North America, as a whole, had its second warmest January on record, with a temperature departure from average of +3.96°C (+7.13°F). This was only 0.10°C (0.18°F) shy of tying the record warm January set in 2006."

The culprit in the reversal of North America's temperature fortunes between January and now is a phenomenon called a "sudden stratospheric warming." During winter, stratospheric winds that make up the notorious polar vortex swirl strongly from west to east around pole. But about six times per decade, they weaken. In fact, the polar vortex winds can weaken so much that they may even reverse direction.

As the winds slow or reverse, stratospheric air sinks and warms as it is compressed. And it is indeed sudden, with the air warming by 50-70 degrees F in a few days. Sometimes, this chain of events can ultimately sap the strength of the tropospheric jet stream, which circulates lower in the atmosphere. And that, in turn, can unlock the door to the Arctic, allowing frigid air to spill into the middle latitudes.

Other factors have also helped throw open the door and keep it open. But that gets pretty complicated and is beyond the scope of what I set out to write about here.

Suffice it to say that we're talking about weather right now. That happens day-to-day, and week-to-week, whereas climate is a longer-term phenomenon. Even so, thanks to January's relative chill, and what we're seeing this month, 2021 may be even less likely to be among the top five warmest years.

If that holds true, don't let anyone tell you that it shows global warming is a hoax. Ditto that the current Arctic blast has exploded the human-caused climate change myth. Keep your eyes on the long-term trend of warming, and all the impacts we've been experiencing in recent years. This lived experience gives the lie to hoax and myth claims.