eARTh: A Portrait of Our Planet Painted With Photons 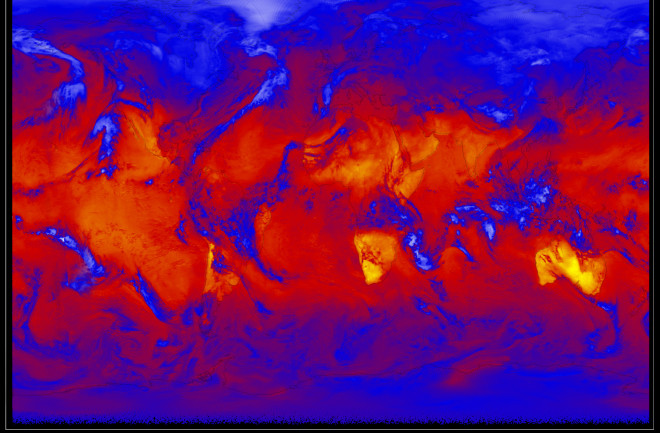 An instrument aboard the NOAA-20 satellite acquired this image portraying heat energy radiated from Earth. Bright yellow regions are the hottest and emit the most energy out to space. Dark blue and bright white regions, which represent clouds, are much colder and emit the least energy. (Source: NASA) When I first saw this beautiful remote sensing image, I couldn't help but feel that I was looking at a painting by an abstract expressionist. Starting in the 1940s, abstract expressionists like Jackson Pollock and Clyfford Still "valued spontaneity and improvisation, and they accorded the highest importance to process," writes Stella Paul of the Metropolitan Museum of Art.

The Flame by Jackson Pollock, c. 1934-38. For more information, and other works by Pollack, click here. (Source: Museum of Modern Art. © 2018 Pollock-Krasner Foundation / Artists Rights Society, New York) These artists placed "an emphasis on dynamic, energetic gesture," she notes. Their works also were primarily abstract. You can see these very qualities in the Jackson Pollock painting at right. (Click to enlarge it.) In the remote sensing image above, the continents all aglow like faint apparitions, as well as the scientific color key, were obvious give-aways that this was something other than a painting. Yet it is very much the product of rigorous process. And to my eye at least, the interplay of colors express a dynamism that looks almost painterly. The pattern also looks abstract, at least at first glance. But in fact, what we see in this image is a kind of portrait of our planet painted with photons. Those photons were collected by a sensor aboard the new NOAA-20 satellite not long after it began scanning Earth for the first time on January 5 of this year. Those photons constitute light that our eyes cannot see — light in the infrared part of the electromagnetic spectrum emanating up into space from the land, oceans, and clouds. The scientific term for these infrared emanations is "outgoing longwave radiation," or OLR. More simply, it is heat energy that is rising up from Earth's surface, up through the atmosphere, and out into space. This energy isn't generated by Earth itself. The ultimate source is incoming energy from the Sun.

In this mage from the NOAA-20 satellite, the white and green shades represent thick cloud cover reflecting incoming solar energy back to space. The darker blue regions have no cloud cover. (Source: NASA) Roughly a third of the solar energy reaching Earth is reflected back into space by clouds, ice and snow. The remaining two-thirds is absorbed — mostly by the land and ocean waters, but some also within the atmosphere. To understand what happens next, imagine a brick wall bathed in sunlight all day. If you put your hand next to the wall late in the day, you'll feel warmth emanating from the brick — even for hours after sunset. This is infrared energy. Similarly, after absorbing solar energy, Earth's surface, and the atmosphere itself, both reradiate infrared energy that ultimately finds its way to the top of the atmosphere and out into space. This outgoing longwave radiation is mapped in the image at the top of this post. So another, perhaps fanciful, way to think about the image is to consider it a planetary portrait painted with heat energy. Bright yellow areas, like those over Africa and Australia, are warmest and emitting the most energy out into space. The darker blue and bright white areas are emitting the least energy, and so they are coldest. These are mostly clouds. One other thing is worth mentioning: All of the infrared energy reradiated by Earth's surface and atmosphere doesn't make it straight away out into space. Some of that energy hangs around for awhile as a result of the natural greenhouse effect. Here's what happens: Molecules of water vapor, carbon dioxide and other greenhouse gases absorb some of the infrared energy trying to make it out of the atmosphere. This causes their temperature to rise. And as this happens, these molecules begin radiating more heat. Some makes it down to the surface, causing warming there. The bottom line: This natural greenhouse effect raises Earth’s surface temperature to about 15 degrees Celsius on average. That's more than 30 degrees warmer than the surface would be if we didn’t have an atmosphere with just the right amount of greenhouse gases. And lucky for us, because otherwise Earth would be like a big snowball. As we add greenhouse gases to the atmosphere through fossil-fuel burning and other activities, we cause more heat energy to be retained for a longer period in the Earth's climate system. The result: global warming. It's a simple matter of physics.