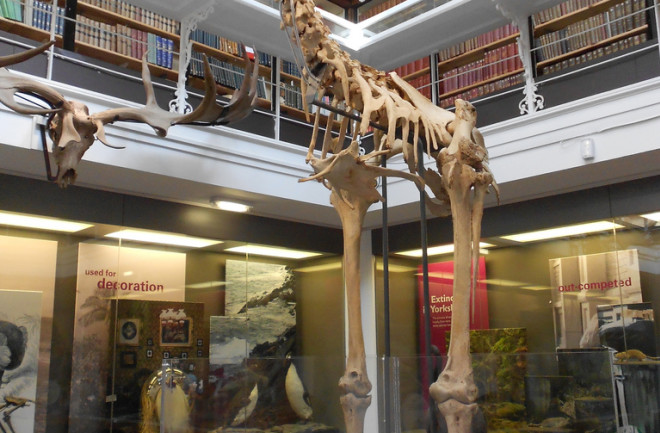 Moa (Dinornis robustus). Image courtesy of tnchanse/Flickr What was the largest extinction event of the last 12,000 years? Believe it or not, it's birds. Scientists now say almost a thousand species of birds---many of them the big, flightless variety---disappeared from the Pacific Islands during the Holocene, killed by early settlers before the Europeans ever arrived. And because many of these species could only be found on these islands, the loss of their endemic populations meant global extinction. Scientists pieced together the fossil record from the Late Quaternary period on 41 Pacific islands. After extrapolating to fill in the gaps, the researchers determined that at least 983 species of nonpasserine, or non-perching, birds went extinct, according to their results published in the Proceedings of the National Academy of Sciences this week. The total is expected to be much higher if seabirds or songbirds were included, but they left far fewer fossils. Remote islands in the Pacific Ocean, like Samoa, Fiji and Hawaii, were the last places on the Earth to be colonized by people. Human populations didn't start arriving until 3,500 years ago. For some islands it was even a few thousand years after that. But when people did finally arrive, landbirds felt their presence almost immediately. Hunters sought big, meaty birds like the Moa (skeleton pictured at right), and succeeded in killing many of them due to the fact that many of these birds couldn't fly away. Likewise, clearing of the forest led to a devastating loss of habitat for the birds. In the few hundred or thousand years (depending on the island) between initial colonization and the arrival of Europeans, two thirds of native nonpasserine bird populations were eliminated. This is the first time the extent of this destruction has been quantified. Score: humans, 1, nonpasserine birds, 0.