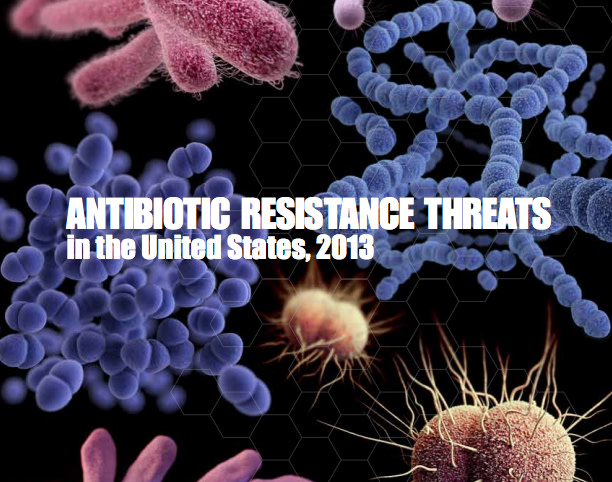 Drug-resistant bacteria are cropping up throughout the country's hospitals and farms today due to overuse of antibiotics. On Monday, the Centers for Disease Control and Prevention (CDC) came out with the first-ever State of the Superbugs address, assessing the scope of the problem of antibiotic resistance in the U.S. The report's intro

articulates the core of the problem:

Each year in the United States, at least 2 million people become infected with bacteria that are resistant to antibiotics and at least 23,000 people die each year as a direct result of these infections. Many more people die from other conditions that were complicated by an antibiotic-resistant infection.

Bottom line: It's time to step countermeasures into high gear. As The New York Timesreported

The agency warned of “potentially catastrophic consequences” unless prompt action is taken. It said that up to half of the antibiotics prescribed for people are not needed or appropriately used (as when a broad spectrum antibiotic is used instead of a more targeted drug).

But the report goes beyond hospitals. The CDC also acknowledged the role of food producers in the problem. As reported

It puts the CDC in line with a substantial body of research pointing to agricultural use playing a role in the emergence of resistance outside farm properties...Surely it’s time to move on to whether there are things that could be done to curb the risks posed by some ag practices, while respecting the role that livestock-raising in particular plays as a substantial economic sector, and as an engine in feeding the world.

The report points fingers at the major microbial culprits. Three superbugs are considered urgent threats: the bacterium that causes gonorrhea, the strains of Enterobacteriacae resistant even to the "drug of last resort

", and the infamous Clostridium difficile, described by the CDC as follows:

Another dozen microorganisms are flagged

as serious threats---among them, Salmonella and the bug behind tuberculosis---and three were categorized as concerning, including Staph and Strep bacteria.

So what are the battle plans? The report includes recommendations for doctors, food producers and the general populace. These include actions like being more vigilant about doling out antibiotic prescriptions and improving tracking methods for infections, antibiotic use, and resistance. The effectiveness of these measures, and how successfully they are implemented by players, is yet to be seen. But we've got our hand-sanitizer-free fingers crossed.

Don't Inject Malaria Into Your Brain